For the birthsign, see The Atronach.
For the perk, see Atronach (Perk).

An atronach is one of several species of Daedric creatures or golems, made up almost entirely of a single, pure substance. The name is sometimes applied to man-made constructs that resemble atronachs, but are not Daedra; these creatures are more properly called golems.

All Daedric atronachs share a few characteristics that distinguish them from other Daedra. They are made up of what would normally be inanimate material, and they often appear to be humanoid in form. However, they can be conjured into other shapes.[1] Atronachs generally move by walking or hovering.

Atronachs are considered moderately intelligent, and are frequently used by powerful conjurers as guardians. All atronachs can use magic based on their base element, and are typically weak to opposing magic. Daedric atronachs are unique among the Daedra in that they claim no allegiance to any specific Daedric Prince. They are found nearly as often on Nirn as on any given plane of Oblivion. An exception to this is the storm atronach—as one of the most powerful Daedra species, they are often recruited by the Daedric Princes to protect their realm.

There are five types of atronach found on Nirn, corresponding to the elements of air, fire, ice, storms, and flesh. Note that the so-called "earth atronach," also called an iron or steel atronach, is a creation of the mages around Illiac Bay, and thus technically a golem. For more details on each type of Daedra, see their respective articles as listed below:

Occasionally, the Flesh Atronach is mistaken as being merely undead because of its morbid appearance. However, it is indeed an atronach (as well as being undead), as seen by the glowing enchantments and glyphs used to bind it together. 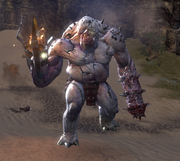 Flesh Atronach in Online
Add a photo to this gallery

Retrieved from "https://elderscrolls.fandom.com/wiki/Atronach?oldid=3076755"
*Disclosure: Some of the links above are affiliate links, meaning, at no additional cost to you, Fandom will earn a commission if you click through and make a purchase. Community content is available under CC-BY-SA unless otherwise noted.