Auridon is the second largest island in the Summerset Isles in The Elder Scrolls Online, along with one of the 20 current regions.[1]

Known as the jewel of the Summerset Archipelago and gateway to Tamriel, this fair isle has long been home to the friendliest and most outward-facing Altmer,[2] who have been hardened by generations of repelling invaders, pirates, and plagues.[3] 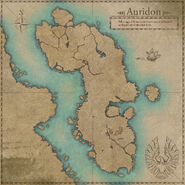 Map of Auridon on the ESO webpage

Auridon Roads
Add a photo to this gallery

Retrieved from "https://elderscrolls.fandom.com/wiki/Auridon?oldid=1412307"
*Disclosure: Some of the links above are affiliate links, meaning, at no additional cost to you, Fandom will earn a commission if you click through and make a purchase. Community content is available under CC-BY-SA unless otherwise noted.