Auriel's bow was said to have been carried into battle by Auri-El against the forces of Lorkhan during the Ehlnofey wars of the Dawn Era. When Trinimac defeated Lorkhan and tore out his heart, Auri-El fastened it to an arrow and shot it long into the sea, where Red Mountain eventually formed.[1][2]

The bow enchantment deals 20 points of sun damage. This damage is tripled if the target is an undead.

It can be upgraded with a refined moonstone ingot at a grindstone and also benefits from the Elven Smithing perk, which doubles the improvement.

"Causes sunburst attacks to nearby targets if shot at the sun with Auriel's Bow" Shooting a Sunhallowed Elven Arrow from Auriel's Bow at the sun will cause the sun to undergo an explosion, causing beams of harmful sunlight to rain down on all enemies similar to the effect of the Storm Call shout.

"Shrouds the sun in sudden darkness when shot with Auriel's Bow" Shooting a Bloodcursed Elven Arrow from Auriel's Bow at the sun will cause a shroud of darkness around the sun, which will dissipate to reveal a black hole-like anomaly replacing the sun. This creates a false-night in which a vampire is unaffected by the daylight. This effect will continue for an entire day in-game. It can cause vampire attacks to happen inside towns during the day. 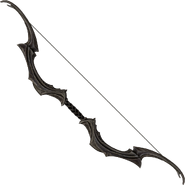 Deutsch Español Nederlands Polski Português Русский
*Disclosure: Some of the links above are affiliate links, meaning, at no additional cost to you, Fandom will earn a commission if you click through and make a purchase. Community content is available under CC-BY-SA unless otherwise noted.
Advertisement