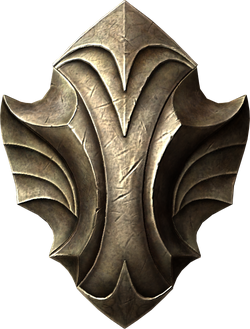 "Auriel's Shield, an Ebony shield said to have once belonged to the quasi-mythical, Elvish deity Auriel, can make its wielder nigh invulnerable. In its resistance to fire and magicka, Auriel's Shield is unsurpassed. To defend its wielder from any attacks it cannot absorb, the Shield lends him or her health. Like many artifacts of Tamriel, the Shield has life and personality of its own, and does not feel bound to its user. A popular fable tells the tale of it abandoning one wielder in her greatest hour of need, but this is perhaps, apocryphal."
―The Elder Scrolls: Arena[src]

Auriel's Shield is an almost mythical artifact of Tamriel. Its origins lay in its creation, when Anui-El created the Shield on behalf of Auri-El, who later wielded it in his battle against Lorkhan during the Dawn Era.[1]

Auriel's Shield is known to have changed hands several times over the years, following its disappearance after the creation of Nirn.

A small group of acolytes that journeyed across the province of High Rock accidentally stumbled across a cave that seemed to lead to deeper, darker depths. An inscription in the entrance of the cave indicated the cave as being the resting place of a map to Auriel's Shield.

During the years 3E 389–399, the Eternal Champion came across this map while on their quest to end Jagar Tharn's unlawful reign. The Champion recovered the Shield from its resting place, either in High Rock or the Summerset Isles (sources vary as to the Shield's exact location).[2]

Six years later, the Hero of Daggerfall uncovered Auriel's Shield in a dungeon in the Illiac Bay. The Hero had originally been given the opportunity to obtain an Artifact of Power by another member of their Knight Order, which involved kidnapping the great-granddaughter of a witch from her (the child's) parents. The Shield was found amongst a scattered amount of rusted equipment.[3]

After a couple of decades, Auriel's Shield re-emerged, this time in the possession of Drelyne Llenim, on the island of Vvardenfell in Morrowind. Llenim was killed by the Nerevarine in the Ghostgate in 3E 427, who became the last known owner of the Shield in the Third Era. Later, during the events of The Elder Scrolls III: Tribunal, in 3E 428, Torasa Aram offered the Nerevarine the chance to sell the Shield to the Museum of Artifacts in Mournhold for 8,500

For the best part of two centuries, Auriel's Shield disappeared once again. However, in the year 4E 201, the Last Dragonborn, on a quest that concerned the Tyranny of the Sun prophecy (which involved Auri-El's other major artifact, Auriel's Bow), killed a Falmer Warmonger who had wielded the Shield against the frost trolls that stalked the Forgotten Vale of Skyrim. This is the last known appearance of the Shield.[6]

In the Shield's various appearances across Tamriel's history it has had various effects placed upon it. Below is a list of known abilities the Shield possessed at different times.

Retrieved from "https://elderscrolls.fandom.com/wiki/Auriel%27s_Shield?oldid=3083843"
*Disclosure: Some of the links above are affiliate links, meaning, at no additional cost to you, Fandom will earn a commission if you click through and make a purchase. Community content is available under CC-BY-SA unless otherwise noted.