Stores the energy of blocked attacks. Performing a power bash will release the stored energy.

For other uses, see Auriel's Shield.

Auriel's Shield is a unique heavy shield found in The Elder Scrolls V: Dawnguard. Its armor rating is identical to that of an ebony shield.

Auriel's Shield is located in the Forgotten Vale Forest, a sublocation of the Forgotten Vale that can be accessed by placing the ruby paragon inside the recess in the top of the short pillar next to the entrance of the paragon platform, which creates a portal that sends the Dragonborn to the Forest. The shield is being carried by a Falmer Warmonger inside the forest. After dispatching the Falmer, loot the corpse to claim the artifact.

Auriel's Shield can be upgraded at a workbench with refined moonstone and the Arcane Blacksmith perk. It also benefits from the Elven Smithing perk, which doubles the improvement. 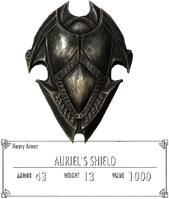 Alternate version of Auriel's shield. (ID xx0071e1)
Add a photo to this gallery

Retrieved from "https://elderscrolls.fandom.com/wiki/Auriel%27s_Shield_(Dawnguard)?oldid=3122788"
*Disclosure: Some of the links above are affiliate links, meaning, at no additional cost to you, Fandom will earn a commission if you click through and make a purchase. Community content is available under CC-BY-SA unless otherwise noted.