For the creature in Online, see Auroran (Online).

Aurorans are Daedric creatures from Meridia's realm, commanded by Umaril the Unfeathered.

Aurorans typically wield an Ayleid Battle Axe. These Daedra were created by the Daedric Princes Meridia, Azura, and Sheogorath.

The Path of the RighteousEdit

Aurorans appear and attack the Great Chapel of Zenithar after retrieving the Mace of the Crusader.

The Sword of the CrusaderEdit

The Sword of the Crusader needs to be reconsecrated at The Great Chapel of Arkay, but Aurorans arrive to desecrate the altar.

During this quest, several Aurorans can be found in Garlas Malatar. They will attack the Hero and will be resurrected upon death until the dark orb has been destroyed.

They attack in groups and have a medium defense rating.

Aurorans have weak arrow defenses, making it easy for rangers to sneak-kill them all. 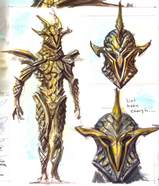 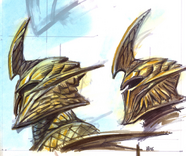 Auroran concept art
Add a photo to this gallery