"The rugged coast and islands of northern and eastern Vvardenfell are called Azura's Coast. Despite the rocky terrain, a variety of plants thrive on the regular rainfall."
―Anonymous[src]

Azura's Coast is one of the longest regions located in Vvardenfell. The whole takes up the eastern coast of Vvardenfell, which stretches to the Ascadian Isles and Vivec City to the Grazelands and near the city of Firewatch on the mainland. The region consists of several small islands with one or two settlements occupying them, this is evident with towns such as Tel Branora and Tel Aruhn, that make up a large portion of the land. The region is critical for trade, not only are there several House Telvanni settlements along the coast, but there are mainland colonies across the sea such as Firewatch and Velothis Haven. There are small coves and grottoes located along the coast, that house all sorts of creatures ranging from Dreughs, Bull Netchs, and sometimes run away Slaves from the Telvanni settlements. The city of Sadrith Mora is the biggest settlement in the area and is where most of Telvanni's influence comes from within the District of Vvardenfell.

During the Interregnum in 2E 583, the Great House Telvanni governed the region from the city of Sadrith Mora. Telvanni, along with House Dres, was not a part of the Ebonheart Pact and because of this, they still kept Argonian slaves in their strongholds, despite Argonian Soldiers in the Pact. The leader of Telvanni was Archmagister Gothren, who resided in Tel Aruhn. Around this year, an Argonian slave was freed from slavery and rose through the ranks of House Telvanni. The slave girl, Sun-in-Shadow and her ally, an Outlander named the Vestige, traveled to the separate Telvanni Towers and were given writs that earned Sun-in-Shadow her freedom. She was able to buy property near the town of Vos, for a new Telvanni tower. Although there were disagreements with the Council of Telvanni, people such as Gothren and Ralasa Delvi were strongly against this. She was eventually able to retain her role as an Oathman of House Telvanni.[1][2][3][4][5]

Around this time, an Ashlander from Ald'ruhn named Chodala stumbled upon the Sunna'rah, a powerful device created by Sotha Sil and proclaimed himself as the Nerevarine. After escaping Ald'ruhn, he traveled to the ruins of Kaushtarari to speak with Malacath, to help him against the Ashlanders and the Tribunal. He was defeated by the Vestige and his sister, Seryn. Chodala was under the influence of Barbas, the Hound of Clavicus Vile. His plan was to open a way to the Clockwork City.[6]

A Telvanni Wizard in the Zafirbel Bay opened a rift to the Clockwork City, more specifically, the Halls of Fabrication. Divayth Fyr and his assistants created a rift and let Sotha Sil's fabrications into their newly constructed tower of Tel Fyr. Fyr tasked a group of adventurers to travel across the Halls of Fabrication and to defeat the cause of their plight.[7]

In 3E 414, the Vvardenfell Territory of the Tribunal was under Imperial protection as per order of the Treaty of the Armistice. No settlements were constructed in the territory other than cities built by the Great Houses of Morrowind such as the cities of Balmora and Sadrith Mora. It was until in 3E 414, that King Athyn Llethan of Mournhold revoked a Temple ban on trade and settlements in Vvardenfell. Azura's Coast was less affected by this new approach, the only established settlement made by the Empire was the fortress of Wolverine Hall, located in Southern Sadrith Mora. Nothing else had changed throughout the coast, but it remained highly populated with the waves of seafarers and slavers coming from the sea. Telvanni Towers began to pop up beyond Azura's Coast such as Tel Vos and Tel Uvirith. Many of the Telvanni Councilmen that remained from the Second Era continued to rule their respective settlements, except for Master Neloth, who replaced Nelos Otheri as the leader of Sadrith Mora.[8]

The Shrine of Azura watches over the region. 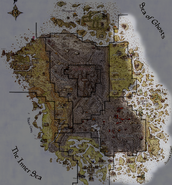 Azura's Coast in Vvardenfell.
Add a photo to this gallery

Retrieved from "https://elderscrolls.fandom.com/wiki/Azura%27s_Coast?oldid=3128142"
*Disclosure: Some of the links above are affiliate links, meaning, at no additional cost to you, Fandom will earn a commission if you click through and make a purchase. Community content is available under CC-BY-SA unless otherwise noted.