"In the secluded grove known as Bad Man's Hallows, local villagers have gathered for a festival to placate the Bad Man, the ancient Breton god of crop failure. According to tradition, appeasing the Bad Man will ensure good fortune and a bountiful harvest."
―Loading Screen[src]

Bad Man's Hallows is a secluded grove located south of Daggerfall Docks, Glenumbra. Outside the Vestige will find Brother Gaubert, inviting them inside to join in the harvest festival. Inside is a large scenic area with tents, a lake, and a large tree in the middle. There are people around preparing for the festival.

The glen will initially appear verdant and peaceful. After burning the roots during the quest, the glen will be scorched and covered with bones.

Underneath the tree in the grove is a large area of root tunnels and rooms. Here, some creatures may be found among the vines and scavengers and the dead.

The Vestige entered a secluded grove near Daggerfall Harbor called Bad Man's Hallows. The people here are engaged in a festival honoring the Bad Man, an ancient god that controls harvest.

Can't Take it With ThemEdit

Finvir, a Wood Elf down in the Bad Man's Tunnels, claims he is one of the mages that originally summoned the Dremora Lord now posing as the Bad Man.

Recover the Discordant Fiddle from Bad Man's Hallows in Glenumbra.

One of the tents 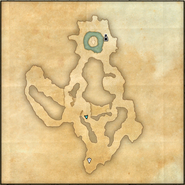 Map of Bad Man's Tunnels
Add a photo to this gallery

Retrieved from "https://elderscrolls.fandom.com/wiki/Bad_Man%27s_Hallows?oldid=3039161"
*Disclosure: Some of the links above are affiliate links, meaning, at no additional cost to you, Fandom will earn a commission if you click through and make a purchase. Community content is available under CC-BY-SA unless otherwise noted.