For other uses, see Bal.

"Bal Foyen, on the southern coast of Morrowind's Inner Sea, was a wild expanse of marshland until recently. Now much of it has been turned over to the Dark Elves' former Argonian slaves, who plant saltrice and herd guar in the former wastes."
―Loading screen[src]

Bal Foyen is a coastal region in the province of Morrowind.

Bal Foyen is a volcanic landscape of towering fungi, ash-filled winds, and many native creatures, such as kwama, netches, rats, and guar. Once nothing more than a wild expanse of marshland, much of this small region of Stonefalls was granted to freed Argonian slaves upon the creation of the Ebonheart Pact. The soil has been fertilized by the ashfall carried by the winds from Stonefalls, making Bal Foyen an ideal place for farmers and herders.

The Argonians who now make their homes here have established small farming settlements of shabby mud huts, built up near their guar pens, and grow saltrice and other crops in the fertile soil of the former wastes. The region is also home to Fort Zeren, a fort built by the Dunmer to protect both Bal Foyen and Davon's Watch from attack.

Three skyshards can be found in this region. Their locations can be seen on the map to the right.

This section covers the Resources and herbs that can be found on the region of Bal Foyen. Note: Items used for Woodworking, Crafting and such leveled items are left as their form, such as Ore Veins and Wood. 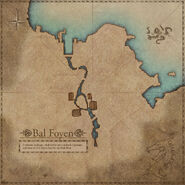 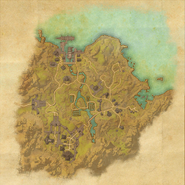 Retrieved from "https://elderscrolls.fandom.com/wiki/Bal_Foyen?oldid=2897883"
*Disclosure: Some of the links above are affiliate links, meaning, at no additional cost to you, Fandom will earn a commission if you click through and make a purchase. Community content is available under CC-BY-SA unless otherwise noted.