It was built by the ancient Dwemer civilization.[1] In the deepest section, it contains a large mechanical weather machine, known as Karstangz-Bcharn.

It is located below Plaza Brindisi Dorom. The entrance to the ruin is under the statue of Almalexia and Mehrunes Dagon. There are many corridors and rooms blocked by rubble, however, the ruin is generally well-preserved for Dwemer ruin standards. The chambers are spacious, some have large fans on the ceiling. The designs on the walls and floors are different from those found in other Dwemer ruins found on Vvardenfell. Water pipes with glass windows, where the contents can be seen as it bubbles past. The ruins have an enormous architectural and historical value: No one was able to pillage it because it was inaccessible for centuries. Even the ashen remains of the Dwemer who once called this place home are still found undisturbed throughout the chambers and corridors. The whole ruin is guarded by many hostile dwemer Animunculi.

The first area discovered, from Plaza Brindisi Dorom, within the ruin is Hearthfire Hall. There are numerous enemies amidst the ruined columns and piles of rubble in this massive chamber. The Nerevarine can easily be overwhelmed here. From here there are two doors, one, to Passage of Whispers, leading further into the ruins and the other leading to the Hall of Winds, which is a dead-end.

Another dead-end set of rooms, similar to the Hall of Winds. There are beds, tables, and wardrobes. A set of Dwemer Airship Plans can be found on a table.

The large area of the ruin where the Ghost of Radac Stungnthumz resides in his reborn form. His workshop area has a large mechanical inanimate construct, similar to centurions, however, it is triple the size of usual centurions. Further into the halls, there is a small room with valuable loot such as diamonds and raw ebony. There are also two more Dwemer Satchel Packs.

Passage of the Walker[edit | edit source]

This area can only be reached by using a Dwemer Satchel Pack to create a passage through the rubble in Radac's Forge. It leads to King's Walk and hides the entrance to the daedric shrine Norenen-dur behind another wall of rubbles.

This area is essentially one long corridor leading to Skybreak Gallery. In the lower section, there is a large water pipe that has been damaged severely and is now the source of flooding.

This is where the weather control device Karstangz-Bcharn is located. However, it will need to be powered up before it can be used.

A Show of Power[edit | edit source]

Deep inside Bamz-Amschend there is a miracle of Dwemer technology: Karstangz-Bcharn, a device said to be able to control the weather. Almalexia wishes to demonstrate to her people that she is still mighty, and sends the Nerevarine to use this ancient machine to unleash an ashstorm on Mournhold.

The Blade of Nerevar[edit | edit source]

There is a number of leveled Dwemer Animunculi throughout the whole ruins. 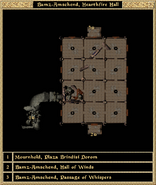 Retrieved from "https://elderscrolls.fandom.com/wiki/Bamz-Amschend?oldid=3076825"
*Disclosure: Some of the links above are affiliate links, meaning, at no additional cost to you, Fandom will earn a commission if you click through and make a purchase. Community content is available under CC-BY-SA unless otherwise noted.