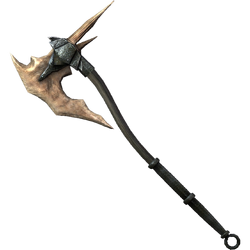 For other uses, see Battleaxes.

Battleaxes are massive, Two-Handed axes found in The Elder Scrolls V: Skyrim. They deal more damage than One-Handed War Axes, but are far larger and leave the Dragonborn unable to hold a shield in conjunction. Battleaxes swing slower than greatswords, but quicker than warhammers.

A Bound Battleaxe can be conjured with the corresponding spell.

Retrieved from "https://elderscrolls.fandom.com/wiki/Battleaxes_(Skyrim)?oldid=2969350"
Community content is available under CC-BY-SA unless otherwise noted.