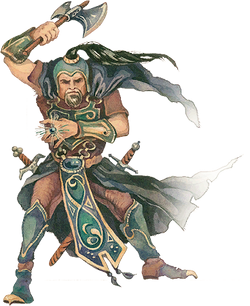 Battlemage is a class in various The Elder Scrolls games. They commonly focus on combat using both magic spells, as well as blunt and blade weapons. Battlemages are a deadly mix of scholar and soldier, and are trained to utilize offensive spells during combat. In such situations, battlemages have few equals. These adventurers prefer to remain on the offensive and dispatch a target quickly rather than waiting on their opponent to make a mistake. They are also capable alchemists that use potions and poisons to give them an extra edge in battle.

"Able to resolve most conflicts with either spell or sword. They are a deadly mix of scholar and soldier."
―Oblivion in-game description[src]

The Battlemage is a pre-made class with the following stats:

Battlemages are highly useful for players who don't like long, drawn out fights. Using their skill in Blade, Blunt and Destruction magics they quickly dispatch any opposition, while alchemy allows the creation of strong potions to restore health or augment abilities, as well as powerful poisons to further shorten battles. Conjuration allows them to summon powerful allies to cause even more damage to opponents, and to serve as protection in combat. Lacking armor or shield skills, a Battlemage will need to either use summoned creatures to divert enemy attention away from themselves, or, like the Witchhunter, use bound armor. Summoning creatures may give the battlemage a chance to get around an enemy and attack from the rear.

Using magic rather than bows for ranged damage makes arrows irrelevant. One drawback of the class is that having both blunt and blade skills for melee can be considered overkill, while making a similar class using one or the other allows you to tag a more useful skill, rather than having an excess melee skill.

Čeština Deutsch Español
*Disclosure: Some of the links above are affiliate links, meaning, at no additional cost to you, Fandom will earn a commission if you click through and make a purchase. Community content is available under CC-BY-SA unless otherwise noted.
Advertisement