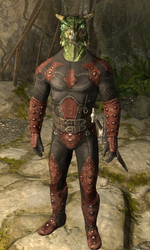 Examples of beastfolk, a Khajiit (left) and an Argonian (right)

Beastfolk or Beastmen[1] (Aldmeris: Betmer, "beast mer"[2]) is the collective term used to refer to bestial races. Drastically different, culturally and physiologically, from men and mer, the Beastfolk possess different skeletal structures and metabolic processes (even amongst themselves). While rumors of interbreeding between beastfolk and other races exist, none have been proven.[3]

Beastfolk come in a variety of colors and body structures, and are not sub-species of the same proto-race like men and mer. Included in this category are the Khajiit and Argonians.

Vvardenfell savant Okan-Shei professed that Betmeri, or "Beastmen," were the aboriginal inhabitants of Tamriel. Each bestial race reports differently in Mythic Era history, before the Invasions of men and mer.[4][UL 1]

The origins of beastfolk, unlike mer and men, vary from race to race. Though the beastfolk were the first inhabitants of Tamriel, they did not create written records until the empire of Tiber Septim, making it difficult to determine how long Beastmen were in Tamriel before the first mer.

No official information has been released about the lifespans of beastfolk. The immortal beings known as dragons, not unlike beastfolk but considered 'mere beasts' by most people, are in reality highly intelligent creatures of divine origin, unrelated to the bestial races.[5]

The Argonians are a race of reptilian creatures native to Black Marsh. They are highly resistant to disease and can breathe underwater, as well as the only race of Tamriel that are completely unrelated to men and mer, having descended from a race of sentient trees known as Hist. Argonians possess tails, the only playable race besides the Khajiit to do so. When swimming, they use their tails to propel themselves as they glide through the water. Both male and female Argonians exhibit sexual qualities similar to men and mer, but no well-documented cross-breed offspring have been discovered, possibly because Argonians are egg-layers.[6][7]

Dragons (or Dovah; "Dov" refers to Dragons as a race) are a reptilian race originally native to Akavir that were once widespread throughout Tamriel. Despite their bestial appearance, they are known as much for their intelligence and wisdom as they are for their raw, uncontrolled power. They possess their own spoken and written language, and are capable of comprehending other languages. They, for the most part, consider non-Dovah to be weak-minded.[5] Some words in their spoken language can be projected into a powerful magic known as the Thu'um (literally "Storm Voice") which is known to some simply as "The Voice," but widely known as "Shouts." They were nearly driven to extinction, and were widely believed to be until 4E 201 when they resurfaced in Skyrim with the return of Alduin.

The Dreugh or Dreughs[8] are a race of powerful aquatic creatures[9] observed primarily in Morrowind (especially the Inner Sea), the Illiac Bay, the Abecean Sea, Black Marsh and Cyrodiil. They are often hunted for their wax and hide.[9][10]

Once common throughout Vvardenfell, Ebonheart, and the surrounding waters, they have been driven into isolated pockets in more recent times.[11] There is some doubt on whether they shouldn't be classified along with Argonians, for their semi-aquatic nature and "troglophiliac" humanoid form.[3]

According to legend, the Dreugh devolved from a much more intelligent and civilized race due to conflict with the Dunmer (who used their hides and wax), and powerful, tyrannic Dreugh kingdoms are reported by Mankar Camoran in his Mythic Dawn Commentaries, even going as far as to state they once ruled the world.[10][UL 2] That notion is explored in Vivec's lessons, where it is stated that, "when the dreughs ruled the world, the Daedroth Prince Molag Bal had been their chief." The sermon gives details of the form Bal took at the time, describing it as "spiny and armored and made for the sea."[8]

Giants are a race of gargantuan humanoids found in the wilderness of Skyrim and High Rock. Infamous for their colossal height and immense strength, giants share little civil interaction with humanoids, if in fact any. Culturally, giants herd Mammoths, processing their milk into cheese, and complementing their omnivorous diet with the cooked meat of skeever. Seemingly nomadic, giants travel with their herds, setting up camps across Skyrim and High Rock. Invaders are attacked with the massive clubs forged by the giants that look like they have been made out of tree trunks and large rocks. Their physical similarities with Orcs—jutting lower canines, tapered ears and the presence of stumpy horns on the temples (much diminished in giants)—serve as possible evidence of some loose relation to the mer.

Goblins are small but tough two-legged creatures found in Cyrodiil. They are a bit shorter in size than the average mer. Goblins have blue or green-hued skin, and bulbous eyes. Most goblins are part of a goblin clan that congregates around a certain location, particularly caves and mines, but also may be found living in sewers or various ruins. They are thought to be extinct since the Third Era. It has been suggested that Goblins are not sentient. This is not necessarily true, however, as there is much evidence of animal domestication and social structure with ranks among those in a particular group.

Relatively little is known about the Hist. They are sentient trees that are native to Black Marsh. It is also believed that Hist trees are intelligent and have a conscience, and their roots are buried in the "soft white stone of the marsh." The Hist are thought to share a mind or have a hive mind ability. Though they share a mind, it is possible for one to "go rogue" and "escape itself." In such instances, the Hist purge the rogue tree. This last happened to a tree in Lilmoth over 300 years ago. The current Lilmoth Hist grows from part of its root.[12]

The Great Apes, or Imga, reside in the province of Valenwood and idolize the Altmer of the Summerset Isles, with some going so far as to shave themselves and powder their skin so as to better emulate their appearance.[13]

The Khajiit are a feline race native to Elsweyr, with superb inherent nocturnal vision and pointed ears that have led some to believe their phylum contains mer blood. The "breed" of each Khajiit is determined by the position of the moon during their birth; there are supposedly more than 20 breeds of Khajiit, but only 17 have been verified. The most common breed is the Cathay. Khajiit are known for their natural agility, stealth and fondness for Moon Sugar/Skooma. Khajiit typically refer to themselves in the third person, unless provoked by a hostile.[14]

Lamias (singular: Lamia) are semi-aquatic, exclusively female, serpentine creatures, having the torso of a humanoid, while boasting the lower body and head of a snake. Generally, savage and hostile to most other races (although there have been exceptions), Lamias can typically be found dwelling in swamps all over Tamriel. Despite their feral nature, Lamias are capable of speech, as well as spell casting and can to perform some basic cultural and religious practices.

The Lilmothiit are a fox-like beast race who once inhabited the Black Marsh. They were a tribal race and they may have been related to Khajiit of Elsweyr.[7]

Minotaurs, also known as Man-bulls or Bull-men, are a race of beastfolk native to Cyrodiil,[15] identified as having the body of a Man and the head of a bull.[UL 3] Always a target of suspicion and fear because of their size and strength, they were redefined by the Alessian Order as "monsters" during the early and middle First Era, and classed alongside creatures such as Ogres and Trolls. They were driven into the hills and forests, and their previous culture was lost.[15][16]

Nymphs are a mysterious and rare race that resides on the continent of Tamriel. All of the species seem to be female and are described as beautiful, naked women who like to have indiscriminate sex by the common folk and even scholars.[17]

Rieklings are small goblin-like creatures found on the island of Solstheim. They tend to live in small tribes in caves, ancient ruins and even mountain peaks. They are hostile in nature, but individually pose little threat. They typically rely on strength in numbers and a small group can quickly overwhelm an enemy. Riekling settlements give insight into their level of intelligence, which corresponds roughly to a stone age society: they have developed simple tool-crafting and elements of rudimentary language and religion, and have domesticated Bristleback, which they raise for food and use as mounts. Characteristics of Riekling religion include the "Godspeak Song" and the construction of shrines, but there does not appear to be any shamans or other religious leaders. At least one Riekling is known to have learned to speak intelligently.

For millennia, these hulking, slug-like creatures, notorious for their necromantic mastery, terrorized the Altmer, conjuring sea monsters along the coast and laying siege to Skywatch. They are said to operate airships, and to live on the semi-submerged continent of Thras. It is unknown exactly how Sload reproduce. Adult Sload have never been seen to involve themselves in such things, and seemingly have no interest in the fate of the young. Sload begin their lives as "disgusting little amorphous grubs." As they age, these grow into a purely aquatic stage that is described as "soft," "squishy," and "octopus-like." Upon reaching adulthood the Sload becomes amphibious and have an appearance similar to a large slug.[18][19][3]

Even though the Tsaesci are the best known of Akavir's inhabitants, very little is known about them, and much of it is contradictory or cryptic. Within the current lore of Tamriel, there are two quite different depictions of the Tsaesci. Some evidence seems to indicate that they are humans. Other evidence, however, paints a much stranger picture, as vampiric snake-like creatures that feed on humans. To date, there has not been sufficient evidence gathered to conclusively prove or disprove either, or both, of these depictions. Early depictions of the Tsaesci almost invariably describe them as having the upper body of a man but the lower body of a snake. The most direct evidence of these "snake folk" comes from Mysterious Akavir, which claims that the vampire snakes of Tsaesci ate all of the humans that once lived on Akavir. The reputability of this book is frequently questioned, however, as few of its other claims have been independently verified.[20]

Tang Mo means "Thousand Monkey Isles" in Akaviri. It is also the name that the inhabitants of this land use to refer to themselves. The Monkey People of Tang Mo are described as being Simian-like. The Tang Mo have had to defend their nation over the eras from all of the other nations of Akavir, specifically from the snow demons, "Kamal." It is believed that the Tang Mo have created an alliance with the Ka Po' Tun.[20]

The Ka'Po'Tun are a race present on the continent of Akavir. They are described as being tiger-like cat-folk, possibly similar in appearance to the Khajiit. They are led by the mighty Tosh Raka. Under his leadership the Po'Tun changed their species' name to the Ka'Po'Tun.[20]

Notice: The following are unlicensed references. They are not copyrighted by a ZeniMax Media company, but can still be considered part of The Elder Scrolls lore and are included for completeness.
Čeština Deutsch Español Suomi Italiano Polski Русский Українська
*Disclosure: Some of the links above are affiliate links, meaning, at no additional cost to you, Fandom will earn a commission if you click through and make a purchase. Community content is available under CC-BY-SA unless otherwise noted.
Advertisement