Best Goods and Guarantees is a general store in Leyawiin. The proprietor, Gundalas, has 1000

and a Mercantile skill of 60. When bartering, he buys anything while only selling a variety of general goods. The store sells all the upgrades for the Leyawiin house, My Leyawiin House; each pieces is 1,000

His wife, Elsynia is also a Trader with 1000

and a Mercantile skill of 60. Like her husband, when bartering, she will buy anything while only selling a variety of general goods.

Her wares also include the unique item, Nistor's Boots, which Fortifies Speed and Athletics. The item is also one of the few items enchanted with Water Breathing. 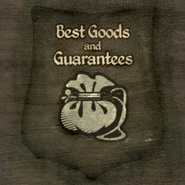 Retrieved from "https://elderscrolls.fandom.com/wiki/Best_Goods_and_Guarantees?oldid=2687802"
*Disclosure: Some of the links above are affiliate links, meaning, at no additional cost to you, Fandom will earn a commission if you click through and make a purchase. Community content is available under CC-BY-SA unless otherwise noted.