For other uses, see Betony.

Betnikh, also known as Betony,[1] is an island that lies off the south coast of Glenumbra. Wrested from the Bretons by the Orsimer centuries ago, it is an easily defended island with high cliffs and rich farmland.[2][3] Although Betnikh is a land of lush forest and cool breezes, there is talk of trouble with menacing, flying insects, as well as necromancy being practiced on the island.[4]

"Nine generations ago, the island of Betony was conquered by the Stonetooth Orcs, who renamed it Betnikh. A proud, self-reliant people, the Orcs fiercely protect their new home from incursion by outsiders."
―Loading screen[src]

Some time in the Second Era, the Orsimer of the Seamount Clan invaded the island, then known as Betony, forcing the Breton inhabitants to withdraw.[5] The island, renamed to Betnikh, would continue to be held by the Seamount Clan who would also refuse to joint the Daggerfall Covenant upon its creation.[6] During the Orsimer invasion of the island, Betony's ruler, King Renwic, discovered an Ayleid relic in the ruins of Carzog's Demise that would grant him immense power. Upon attempting to activate the relic, Renwic realized that souls would be necessary to power it – a sacrifice he was unwilling to make.[1]

In 2E 582, the necromantic Bloodthorn Cult invaded the island, determined to find the relic and use its power.[4][1] With the aid of the Vestige, the Seamount Clan was able to end the plot against the island, killing the Cult's leadership on Betnikh and finding the Ayleid relic. The relic would either be saved for use by the Daggerfall Covenant or destroyed.[7] Regardless of the relic's fate, Chief Tazgol and the Seamount Clan join the Daggerfall Covenant.[6]

The following are locations accessible in Betnikh and, with the exception of unmarked locations, are discoverable on the map. Points of Interest serve as locations with unique side quests, while cities serve as the centralised areas with multiple sublocations and act as a hub for services and merchants. Explanations of the types of locations are provided in the main locations page.

Three Skyshards can be found in Khenarthi's Roost totalling in one skill point. The zone guide provides clues as to the location of each Skyshard, but many can be found simply by exploring and watching for the distinctive pillar of light they emit. 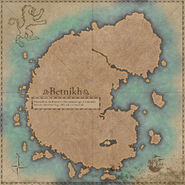 Betnikh loading screen.
Add a photo to this gallery

Retrieved from "https://elderscrolls.fandom.com/wiki/Betnikh?oldid=3127414"
*Disclosure: Some of the links above are affiliate links, meaning, at no additional cost to you, Fandom will earn a commission if you click through and make a purchase. Community content is available under CC-BY-SA unless otherwise noted.