Black Hand Messenger is a creature card in The Elder Scrolls: Legends.

When summoned, the player will be able to deal 2 damage to any enemy creature. Since this card has drain, when it deals 2 damage, the player will gain 2 health. Items can be equipped to Black Hand Messenger to give it power allowing it to attack and give more health to the player with drain.

When destroyed, Black Hand Messenger will trigger its Last Gasp and deal 2 damage directly to the player's opponent but will only restore health to the player with drain if it is destroyed during the player's turn. Its last gasp can be triggered without the opponent attacking it by either using its summon ability on itself, sacrificing it with a betray card or replacing it when the lane it is in is full. 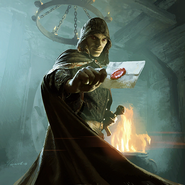 Retrieved from "https://elderscrolls.fandom.com/wiki/Black_Hand_Messenger?oldid=2931515"
Community content is available under CC-BY-SA unless otherwise noted.