For other uses, see Courier.

The Black Horse Courier is a popular newspaper company based in the Imperial City. It is owned by three Khajiit brothers: Hassiri, Ra'jiradh, and Urjabhi. The Empire funds the Courier, so the paper is always free.

Copies of their newspapers can be found in many different locations, such as talking to Vlanarus Kvinchal in the Imperial City Waterfront, or by taking a free copy from their office in the Market District. 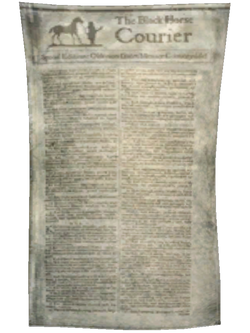 Interior of the building

Basement
Add a photo to this gallery

Retrieved from "https://elderscrolls.fandom.com/wiki/Black_Horse_Courier?oldid=3087979"
*Disclosure: Some of the links above are affiliate links, meaning, at no additional cost to you, Fandom will earn a commission if you click through and make a purchase. Community content is available under CC-BY-SA unless otherwise noted.