The Blackblood Marauders are a faction of bandits encountered in The Elder Scrolls V: Skyrim.

They are led by their captain, Hargar, and are located at the Wreck of The Icerunner and Broken Oar Grotto. In the past, they were a fleet of pirates, but turned to marauding after a cave-in trapped their ships in the grotto. Argonian member Jaree-Ra and his sister, Deeja have been planning a raid on a ship.

They are involved in the quest "Lights Out!," given in Solitude. Jaree-Ra will ask for the Dragonborn's help in causing a ship to wreck near the coast, so it can be looted by him and his gang. Ahtar will also give a quest to kill one of their leaders at Broken Oar Grotto as well.

"You're the one who put out the fire in the Lighthouse, right?"

Yes, I put out the fire. "That was good work. Deeja's in the hold of the ship. Go down two levels."

Marauder 1: "You've been here for a while, right? What was it like back when we could still make runs out to the coast?"
Marauder 2: "Well, before that cave-in sealed our ships in here we could loot any size ship we wanted."
Marauder 1: "Where did you keep all that loot? I've been here almost a year and haven't seen any of it."
Marauder 2: "The Captain has it locked away in that drowned ship by his quarters. He says it's to "keep it safe" but I know he's just keeping it for himself."
Marauder 1: "If only we could get our hands on that treasure. We could get out of here and never look back."
Marauder 2: "Maybe. For now just lay low and do your job. I have a feeling we'll be rid of the Captain soon..." 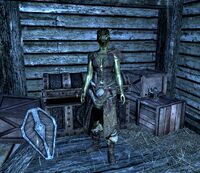 Deeja in the Icerunner
Add a photo to this gallery

Retrieved from "https://elderscrolls.fandom.com/wiki/Blackblood_Marauders?oldid=2836122"
*Disclosure: Some of the links above are affiliate links, meaning, at no additional cost to you, Fandom will earn a commission if you click through and make a purchase. Community content is available under CC-BY-SA unless otherwise noted.