Deep beneath the ruins of Mzinchaleft, Raldbthar, and Alftand

Elder Knowledge
Discerning the Transmundane
A Return To Your Roots

For other uses, see Blackreach.

Blackreach, also known as Fal'Zhardum Din[note 1] in Dwemeris,[1] is a large city in a massive underground cavern found underneath the Tower of Mzark filled with geodes, glowing mushrooms, Chaurus and Falmer. The cavern encompasses the area between three Dwemer cities―Alftand, Mzinchaleft, and Raldbthar―and connects them.

Unlike most other Dwemer cities, some of the glowing mushrooms here are substantially larger than those found elsewhere, with stalks even taller than the buildings themselves. The ceiling of the entire cave system glows with blue bioluminescent lights, and massive glowing vines that hang down, as well as some that "float" upwards near the Raldbthar Deep Market. There is a teal fog within Blackreach that makes grasping the size of Blackreach difficult, and mushroom spores that float throughout the air. Massive geode stones and geode veins also dot the ground, and the pools of water found within are an almost entirely opaque teal.

Typically, this location is encountered as part of the quest "Elder Knowledge." However, it is possible to discover it earlier, by initiating the quest "Discerning the Transmundane."

Sometime after 1E 221,[2] the Dwemer of Skyrim discovered a considerable amount of a raw mineral with considerable magical properties, which they referred to as Aetherium. The Dwemer quickly built four new cities, which were Arkngthamz, Mzulft, Raldbthar, and Bthar-zel (now known as Deep Folk Crossing), which would work together to research this new mineral and develop new technologies forged from Aetherium.[3]

The roles for this project were spread out between the four cities; Arkngthamz would serve as the project's command center and the primary research facility, Raldbthar (which happened to be located directly above Blackreach) would concern itself with mining operations, and Mzulft was used as a storage site. It is unknown what role Bthar-zel undertook in this project, though it is believed it was an experimentation facility. The city of Bthalft was not a part of the alliance, and it was used as the site for the Aetherium Forge; a large, magma-infused forge which would be the basis for extremely advanced weapons, armor, tools, and other items that combined the great metalwork and engineering skills of the Dwemer and the innate magical powers of Aetherium.[3][4]

The project was initially successful; with the alliance of the four cities bringing peace, harmony, and scientific and technological advancement to the Dwemer. However, after three years, the four cities began to yearn for independent control over the Aetherium, the Aetherium Forge and the incredible matter it could create.[2]

The following areas can be reached from Blackreach:

Because of the vast size of Blackreach, these figures may not be exhaustive. 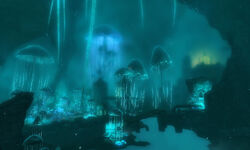 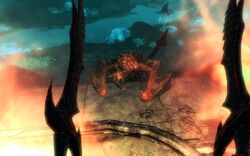 A disabled dwarven centurion in Blackreach.