For the chapter, see The Elder Scrolls Online: Blackwood.

Blackwood is the great southern swamp that drains the lower Niben River out to Topal Bay. The swamp borders Khajiit Elsweyr on the west and Argonian Black Marsh on the east. The border between Blackwood and Black Marsh is nebulous, and is said to be easy to get lost in.[1]

Though hilly in the west and southeast, Blackwood is primarily a flat swamp. The region is particularly lush with violet-flowered bushes, white oak, and bald cypress tress. Visibility is often poor due to fog, mist, and heavy rains as well as foliage.[2] Due to their similar climate it is sometimes believed Blackwood is a natural part of Black Marsh, tainting the clean, idyllic woodlands of Cyrodii with the cancerous growths of deepest Argonia. For generations the noble Nibenese of Blackwood have fought back against these encroaching tendrils of darkness with fire and sword, uprooting and expunging the invasive species and driving them back to their forbidden fens.[3]

Both the Yellow and the Green Roads pass through Blackwood, one on either side of the Niben. Despite the region's low altitude and numerous standing pools of water, the only river is the Panther, which marks Blackwood's northern border with the Nibenay Valley and Basin.

Blackwood's heavy rainfall makes it lush, and a diverse selection of plants can be found. Fungus includes Bog Beacon, Clouded Funnel Cap, and Green Stain Cup. Swamp plants like the Stinkhorn and Tiger Lily grow here, as well as more common staples like Aloe Vera, Domica Redwort, Dragon's Tongue, Lavender, and the Somnalius Plant. Look for clusters of the elusive Pitcher Plant near water, but do not expect to harvest any. The water-dwelling plants Sacred Lotus and Water Hyacinth grow in the numerous shallow ponds throughout the swamp. Nirnroot is abundant and can be found along the coast and the inner lakes, ponds, and rivers.

Creatures inhabiting the swamps include Mudcrabs, rats, trolls, and wolves, as well as Badger Bears.[4]

The cosmopolitan, colorful city of Leyawiin lies in the far south of Blackwood, where the Niben empties into Topal Bay. Alessia Ottus maintains that Leyawiin "boasts the finest collection of shops and tradesman in Cyrodiil (outside of the Imperial City...)" but also dislikes the city for the Argonian and Khajiit "raffish rabble."[5]

The cabins of Greyland and the White Stallion Lodge are nearby. Farther north, the settlements of Border Watch and Water's Edge lie on the thin strip of Cyrodiil between the Niben and Elsweyr. Blankenmarch is northwest of Leyawiin, and lodging can be found at The Drunken Dragon Inn, located in the heart of Blackwood and east of the Yellow Road.

The Shrine of Sheogorath is on the west side of the Niben, close to Bravil. Nocturnal, granter of the useful Skeleton Key, has a shrine just north of Blankenmarch and just off the Yellow Road. The vampiric Deepscorn Hollow is among the most southern locations in all of Cyrodiil, with an underwater entrance in Topal Bay. 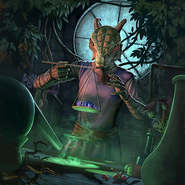 Blackwood Distiller in Legends.
Add a photo to this gallery

Retrieved from "https://elderscrolls.fandom.com/wiki/Blackwood?oldid=3135503"
*Disclosure: Some of the links above are affiliate links, meaning, at no additional cost to you, Fandom will earn a commission if you click through and make a purchase. Community content is available under CC-BY-SA unless otherwise noted.