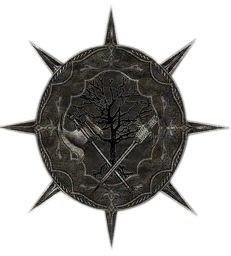 "There is much work to be done here in Cyrodiil! The Blackwood Company is more than willing to do it."
―Jeetum-Ze[src]

The Blackwood Company is a minor faction based in Leyawiin. The Company mostly consists of Khajiit and Argonians. The Company takes jobs the Fighters Guild cannot or will not handle. They are reputed to accept any contract offered, to act recklessly and indiscriminately in their tactics, and to lack any screening process for new members. This is in contrast to the Fighters Guild who have a strict charter and set of rules to abide by. They are the main antagonists of the Fighters Guild questline.

They quickly expanded into Cyrodiil and made their Cyrodiil headquarters in Leyawiin. Blackwood quickly controlled the mercenary market in southeastern Cyrodiil and Black Marsh. This was quick to anger the main mercenary group known as the Fighters Guild in Cyrodiil.

By the time of the Oblivion Crisis, the company was composed of mostly Khajiit and Argonians. They were the most prominent and the richest group of mercenaries in the Blackwood Forest. This put them at odds with the Fighters Guild, another mercenary guild. As a result, a private investigation was done by Modryn Oreyn with the Hero of Kvatch as the investigator. In the quest "Infiltration" the Hero investigates the Blackwood Company and finds out that they are using Hist Sap to give company members a "boost." Hist Sap is the sap of the tree called Hist from the Argonian homeland of Black Marsh. Argonians are immune to the negative effects, but non-Argonians will experience negative and often violent effects. This is why it is declared as an illegal drug like Skooma. The Hero cannot obtain any Hist Sap after the quest.

How to join[edit | edit source]

The Blackwood Company is only joinable as part of the Fighters Guild questline. They have only two ranks, of which only one is available to the Hero:

The Blackwood Company Hall is in Leyawiin across a plaza from its competition the Fighters Guild. There is a display case containing a Blackwood shield, a heavy shield bearing the Blackwood Company crest, and also a silver war axe and silver shortsword crossed at the hilt to resemble the same crest.

The second floor of the Blackwood Company Hall has a Nirnroot in a plant pot on the mezzanine. There is another in Jeetum-Ze's room.

Modryn Oreyn tells Hero that the information they got from Ajum-Kajin before he combusted was not enough. He tells them that they must join the Blackwood Company and find out the secret of their effectiveness firsthand.

Furious with the Blackwood Company's vile illegal activities, Modryn Oreyn sends the Hero into their base to defeat Ja'Fazir and destroy the dangerously powerful Hist.

A Nirnroot can be found in the company's headquarters.

Retrieved from "https://elderscrolls.fandom.com/wiki/Blackwood_Company?oldid=3155399"
*Disclosure: Some of the links above are affiliate links, meaning, at no additional cost to you, Fandom will earn a commission if you click through and make a purchase. Community content is available under CC-BY-SA unless otherwise noted.