"When Brynjolf brought you before me I could feel a sudden shift in the wind. And at that moment, I knew it would end with one of us at the end of a blade. Nocturnal doesn't care about you, the Key or anything having to do with the Guild."
―Mercer Frey[src]

Blindsighted is a quest available in The Elder Scrolls V: Skyrim which serves as the penultimate quest given during the Thieves Guild questline in which the Dragonborn must find Mercer Frey in Irkngthand and recover the Skeleton Key.

I'm on my way to Irkngthand, a vast dwarven ruin that supposedly contains the legendary "Eyes of the Falmer." Karliah and Brynjolf are waiting for me within. Together we hope to stop Mercer Frey from stealing the Eyes and escaping from Skyrim with the Skeleton Key of Nocturnal.

Upon arriving at Irkngthand, be wary of the bandits who have set up camp here. It will be necessary to fight a way up to the top to gain entry to Irkngthand.

Note: If this quest has not been started, full entry to this dungeon cannot be attained (Dungeon Lock Outs). Also, any follower with the Dragonborn cannot enter the ruins whilst this quest is active; they will be waiting for the Dragonborn in Bronze Water Cave.

Once inside, go across the hall and grab the loot in the chest by the fire and bodies. On both sides of the fire are two Dwemer chests, one with an adept lock and the other a master lock. Continue on up the stairs. Make a right, then move forward, down the hallway. Go past the water and through the gates into the next hall. To the right at the end of the ledge is an unlocked chest, and another one can be located down near the patrolling sphere. There is also a Dwarven Sphere patrolling at the bottom of the stairs. If detected, more of them will come out the holes in the walls, so dispatch them as quietly as possible. (One way is to use a sneaking bow attack and kill them one by one.) It is also possible to sneak past the spheres without being noticed. Go to the left of the gate and jump over the fence, then go into stealth and sneak past the one sphere that deployed. In the next room, rotating flame towers will activate. Move around these without making too much noise. The towers are slow enough to sneak through them if timed well. At the final flame tower, go around it to the left and then open the gate to the right of it. Move up the stairs until the master locked gate is reached. In front of the Dragonborn, there will be a ramp with a Dwarven Spider on top. Kill it and hop over the rubble pile to find a hidden chest. Opposite of the master locked gate is a lever. Pull it, and it will open a new area where Karliah and Brynjolf are waiting. Speak to Karliah, and she will explain about the traps that Mercer may have left.

There will be a trap trigger on the bottom left of the doors in front. Disarm the trap, or open the doors and avoid the flying mace ball trap. On the small table is a bottle of Black-Briar Reserve (presumably a calling card from Mercer Frey), and three lockpicks. Turn left and head down the stairs; there will also be an expert locked gate full of loot to the left. Karliah will spot Mercer and a short scene will take place. Afterward, follow the path around and open the door, then down until the next hall is reached.

Upon entering the next hall, turn right and collect the Falmer chest on the right side next to the Falmer hut, then turn around and head over a small mound to find the lever for the gate below. There is a second lever on the right side, across the large set of facing stairs that must be activated quickly after the first, or it will reset and the door will not open. Once the door is open, travel down the stairs, watching for the spinning blades in the ground, and go through the door. Move through the large area, killing the small groups of enemies. Once at the other end, a collapsed tower can be seen, and it is necessary to go up the spiral ramp and through the door at the top. Before leaving the room, make sure to stop and collect the loot that is in the Falmer chest, which is located next to a Falmer tent to the left on the way to the ramp out.

Go down the stairs, carefully avoiding the bear traps. Grab the Detect Life scrolls; there is one near the table on the floor and two in the room to the right. In the room with the two Detect Life scrolls, there will be writing on the walls from Mercer Frey that says, "One Step Ahead - Mercer." The writing, however, is backwards. Travel through the other gate (be cautious for more bear traps), then through the door at the end of the corridor, which leads to a large hall. Brynjolf will explain that the options are to either sneak around or take on the Dwarven Centurion. The level of this enemy is determined by the Dragonborn's Character Level: 10–15 will face a regular Centurion, levels 20–30 will most likely be a Centurion Guardian, and levels 45+ will face a Centurion Master. Because there are a lot of Falmer in this room, it is possible to jump off of the small bridge to the right. On the left, there will be a button that activates the Centurion. Activate it, and the Falmer will become hostile and weaken or kill the Centurion with no intervention from the Dragonborn.

Regardless of the choice, continue to the cage, and then go up the stairs. There should be a path that leads up and around to the next destination. Be cautions of more Falmer traps. Past the bear traps, there should be some frostbite spiders and Falmer across the hall. Once they have been dispatched, collect the loot in the chest next to the Falmer tent at the bottom of the stairs and go through the door leading to the Irkngthand Slave Pens. Go down the stairs and quickly kill the Dwarven Spider, then head left and continue down the stairs. Activate the lever and a spinning blade will take out the two Falmer down below; remember to turn it off before continuing. Run down the hall, but be careful of the three flame pressure plates near the corner.

Once in the next hall, Karliah will say that there are a lot of Falmer in the next room, and will give the option to either sneak or take them on. If it seems easier to sneak past, simply go to the far right-hand side wall and follow it all the way around, into the pen with a small cave at the rear. There is a chest next to the first fire pit in a Falmer tent, and another one in a tent directly across from the first. After the cave, the party will be in a larger cave, with two leveled Falmer in front. Continue down the ramp, and there will be several chaurus, along with another Falmer. If the Sneak skill is high enough, it is possible to bypass the chaurus and Falmer by sneaking along the golden pipes above their heads. Continue through the rear of the cave onto a downward hill, making sure to kill the Falmer before dropping down. Head through the gate, then down into Irkngthand Sanctuary. Note: there are a number of quest-breaking glitches in the next stage, so be sure to create a save before entering the door.

Mercer will be removing the eyes of the statue as the party enters. He will spot the group, and then make the part of the ledge the Dragonborn is standing on collapse. Before the battle begins, he will converse shortly with the Dragonborn about the Thieves Guild and honor before engaging in combat.

Subsequently, he will use a Frenzy-type spell on Brynjolf, making him attack Karliah, and thus rendering them unable to help with the fight. Mercer uses an invisibility spell, so use the Detect Life scrolls, or, if the scrolls were not taken, the Detect Life spell, the Aura Whisper Shout, or, if the Dragonborn is a werewolf, the Scent of Blood power to reveal him and attack. Mercer likes to hit-and-run; he will turn invisible, sprint up to one of two high points in the room; by the statue's head, or a high spot on the other side of the cavern, behind a pillar. After hiding for a couple seconds, he will spring towards the Dragonborn and inflict one or two power attacks before turning invisible again and retreating. Note that Mercer carries lots of healing, stamina and magicka potions, which he will most likely use during the fight. If in werewolf form, moving forward while doing a power attack will knock him off of his feet, leaving him defenseless. For a mage, conjuring an Atronach will help, especially a Storm Atronach to drain his magicka, as an Atronach can still "see" him when he is invisible. If the Dragonborn is an archer, the Archery perk, Power Shot, can knock him off balance, preventing him from approaching the Dragonborn as easily. Another way to defeat Mercer is using Windshear, found during the Dark Brotherhood quest, "Hail Sithis!." When Mercer casts Invisibility, he will still be under Windshear's permanent stagger, and will not move away. After a few strikes, a blood covered silhouette will appear at his location. Alternatively the Dragonborn can stand in front of the face of the statue, and get Mercer to chase you. Then, use the Unrelenting Force Shout to shoot him off the edge. This tactic may not kill him, however he should take enough damage for you to shoot him one or two times with a bow. However, if you are lucky, you can get Mercer in a Kill Camera finisher with your Nightingale Blade to put him down for good and show him the penalty for his treason to both the Thieves Guild and Nocturnal.

Once Mercer is dead, loot both the Skeleton Key and the Eyes of the Falmer from his body, including anything else on him, that being his weapons, gold, potions, and more. His death will also break the spell on Brynjolf and allow him to regain control of his body and stop attacking Karliah.

Brynjolf and Karliah will jump down and the chamber will start filling up with water. Once the water is high enough, a rock above the statue's head will fall off and open up an area above it. Head into the area, which will lead to an entrance to Bronze Water Cave.

Upon speaking to Karliah, she will explain that returning the key will not be easy. The inner sanctum has been locked due to the fact that the Nightingales failed to protect the key in the first place, and the only way through is via the Pilgrim's Path. Brynjolf will head back to the guild while Karliah is too afraid to face Nocturnal after her failure, so the Dragonborn must do this alone. After telling the Dragonborn to return the Skeleton Key, she will hand over the Nightingale Bow.

Karliah will tell the Dragonborn about the various "Agent" aspects that can be assumed at the end of the quest. 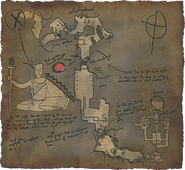 Mercer Frey's plan to recover the Eyes of the Falmer.
Add a photo to this gallery

Retrieved from "https://elderscrolls.fandom.com/wiki/Blindsighted?oldid=2986787"
*Disclosure: Some of the links above are affiliate links, meaning, at no additional cost to you, Fandom will earn a commission if you click through and make a purchase. Community content is available under CC-BY-SA unless otherwise noted.