Epic
'At the start of your turn, if you have 7 or more max magicka, deal 5 damage to your opponent.'

"We will seize our own fate."
―Being summoned[src]

Blood Sorceress is a creature card in The Elder Scrolls: Legends that is a part of The Fall of the Dark Brotherhood expansion.

Blood Sorceress is best played when all three copies of the card are in the player's hand, when the opponent has 15 health left at either 7 magicka or more. This way, all three cards can be placed in the shadow lane, resulting in the death of the opponent the next turn. 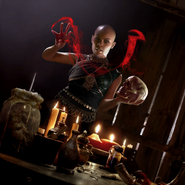 Retrieved from "https://elderscrolls.fandom.com/wiki/Blood_Sorceress?oldid=2870030"
*Disclosure: Some of the links above are affiliate links, meaning, at no additional cost to you, Fandom will earn a commission if you click through and make a purchase. Community content is available under CC-BY-SA unless otherwise noted.