Blood and the Crescent Moon

Blood and the Crescent Moon is a quest available in The Elder Scrolls Online. It involves the Vestige uncovering an assassination attempt on King Casimir.

The bustling city of Daggerfall holds many mysteries. It appears that I stumbled right into one of them.
A dog approached me on the streets of Daggerfall. It seems agitated and wants me to follow it.

When the Vestige first enters Daggerfall, they will hear guards and citizens alike comment on a dog. Alternatively, the dog may approach the Vestige. After speaking with the dog, the quest initiates. The Vestige must follow Giblets, and will eventually reach the lifeless body of Roy, with a note next to it. The Vestige much read the note, and learn that three merchants must be spoken with.

The first merchant is Cristoph Lamont, who can be found at his market stall in the Daggerfall market. When initiating dialogue with him, he will say the following:

"Welcome, friend. You can't get better fruits or vegetables anywhere in Daggerfall, I guarentee it!"

I found this list. Do you have three blood oranges? "Look, I don't want any trouble. That's a phrase used by the King's intelligence network. It means someone's going to get killed. I don't want to know anything more, just leave me out of this."

The King's intelligence network? "I said leave me alone! I'm not involved in this. This sounds like something Roy would want to know about."

Who's Roy? "Damned persistent, aren't you? Roy's a friend. I trust him. People I don't know, I don't trust. And I don't know you."

The second merchant is florist Diane Guissant, who can be found at her flower shop in the Daggerfall market. When speaking to her, she will tell the Vestige the following: 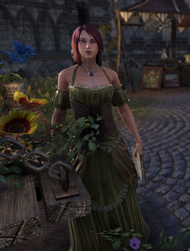 "Flowers for sale! A posy to gain a sweetheart's favor, perhaps?"

Not today. I found a body in the water near the mill wheel. He carried this list. "Oh... that's a pity. Well, now this is a mess."

What do you mean? "I'm taking a chance here. Sometimes I hear strange things. Like what's on that note: black roses with thorns. I've heard whispers of dark nature magic. That's just the kind of thing Roy—your dead man—would be interested in."

How did Roy become involved in all this? "With the note? I don't know. That's just what Roy did. He would find out things. Daggerfall has many eyes and ears. After all, information is cheaper than war."

The third, and final, merchant is the tailor Kareem Winvale. Opposed to the two other merchants, he can't be found in the Daggerfall market, but instead inside his shop. When spoken to, he will say the following:

"Interested in a set of new clothes? Something in silk, perhaps? No one ever leaves my shop empty handed."

I'm looking for a cloak with a crescent emlblem. "I'm afraid those aren't for sale. The crescent moon is the heraldry of the Casimir family, the rulers of Daggerfall."

Why would a dead man write that on a note? "Dead? Rugged fellow, had a dog? That's Roy. Well, that was Roy. I'm sorry he's dead, but I'm not surprised. If you figure out what Roy knew and who killed him, I'm sure someone will reward you. It's also a good way to get yourself killed."

I discovered the meaning of all the items on the list. Where should I report this? "If a crime has been committed, talk to Captain Aresin. It's his job to keep the city safe, so he's as good a choice as any. He's usually by the great stairs behind the Mages Guild. He likes to keep an eye on the approach to the castle."

After locating and speaking with Captain Aresin, he will mention Grenna gra-Kush, urging the Vestige to speak with her. After locating Grenna inside the inn, she will mention Stephen Leveque, who is found on the second floor of the inn. Grenna will suggest confronting him, to learn what he knows, but urges the Vestige not to kill him, as they might need him in the future.

When confronting Steven, he will point the Vestige towards Martine Lerineaux, who resides in Lerineaux Manor. After reaching the manor, the Vestige will be confronted by several Bloodthorn Assassin located within. After defeating the assassins, the Vestige must make their way to the second floor, where they will meet Martine, who turns hostile on sight. After defeating him, the Vestige must enter the bedroom, where they will find a note. Once read, it will be discovered that the Bloodthorn Assassins planned to assassinate King Casimir by sneaking agents through the docks to try and get close to him. After uncovering this information, the Vestige must return to the Captain, and inform them all they have learned. He will thank the Vestige, and award them.

The Note to Martine

Stephen Leveque
Add a photo to this gallery
Retrieved from "https://elderscrolls.fandom.com/wiki/Blood_and_the_Crescent_Moon?oldid=2900977"
Community content is available under CC-BY-SA unless otherwise noted.