"100% effective bloodfiend repellent sold inside! Using a secret combination only recently discovered, you can protect yourself (and your livestock) from all bloodfiend attacks. No more worries in the night, no need to fear for your children and livelihood."
―Advertisement posted outside Three Flasks

Bloodfiends are feral vampires that have gone insane from bloodlust. They are found mainly in the region Rivenspire,[1] but have been seen in other regions, such as Auridon, where they can be found near the town of Phaer. A notable distinction between them and normal vampires is that Bloodfiends will not hesitate to feed upon Corpses.[2]

The main questline in Rivenspire also reveals that House Montclair, led by Lady Lleraya Montclair, is hoping to turn the region into Bloodfiends.[3] 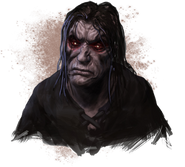 Bloodfiend face concept art
Add a photo to this gallery