Your Vampiric Drain spell absorbs Magicka and Stamina from your victims for x days;

For the quest, see The Bloodstone Chalice.

Activating the chalice grants the effect, Blood of the Ancients. This makes the Vampiric Drain spell absorb Stamina, Magicka, and Health for one day. The duration can be lengthened by completing Ancient Power. 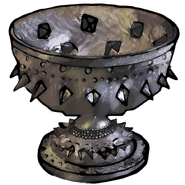