The Boar is a creature found in Cyrodiil. They're fairly rare compared to most other animals, and usually only one is encountered at a time. The boar is among the opponents the Grand Champion of the Arena may choose to fight.

It is found in the wild and will snort and make noise as it runs around. This creature is dangerous to low-leveled characters, but a basic block/attack tactic will work well against it.

Outrunning the boar on a horse is an option. Lacking a horse, it is easier just to stay and fight. 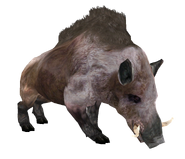 Porkchop the Boar
Add a photo to this gallery

Retrieved from "https://elderscrolls.fandom.com/wiki/Boar?oldid=2952683"
*Disclosure: Some of the links above are affiliate links, meaning, at no additional cost to you, Fandom will earn a commission if you click through and make a purchase. Community content is available under CC-BY-SA unless otherwise noted.