For other uses, see Bonemold Armor.

Bonemold Armor is a set of heavy armor that appears in The Elder Scrolls V: Dragonborn.

It is fashioned from actual bone that's been reinforced with a resin-like material and then shaped to form the armored plating. Although it may appear brittle, it is said to be comparable to iron or steel armors.[1]

It is primarily worn by Redoran guards patrolling Raven Rock, however it can also be crafted. The set comes in two variants, regular and improved, and, in addition, the set also includes two individual chest piece variants, which includes the Bonemold Pauldron Armor and the Bonemold Guard Armor.

The invention of Bonemold armor can be traced back to Dunmer folklore. Legend tells of a noble lord by the name of Arslic Oan. As a servant to the king, he was granted a castle and land for his service. Arslic built himself a walled stronghold and settled down with his slaves to enjoy a quiet life.[2]

Soon after, a tribe of cannibalistic Nords began attacking Arslic's slaves in the fields, and then slowly grew bolder, until they held the very stronghold itself under siege. After several failed attempts at sending his slaves to fetch water from a river, Arslic asked his armorer, Gorkith, to forge an armor sturdier than leather but lighter than metal. Bonemold armor was his answer and although seventeen of his slaves were killed and eaten in the subsequent attempt, one made it back with a jar of water.[2]

This armor piece can only be found on the island of Solstheim. Locations include:

Bonemold Armor requires a Smithing level of 15 and the Steel Smithing perk to create. Pieces can be forged at a blacksmith's forge with the following components:

Pieces can be upgraded with bone meal at a workbench and also benefit from the Steel Smithing perk, which doubles the improvement.

The default Bonemold armor is slightly stronger than steel armor, and weighs less.

The improved armor can only be forged after completing the quest "Paid in Full." It requires the same components as regular Bonemold Armor, along with what is shown in the table. It is slightly stronger than Dwarven armor, and weighs less. 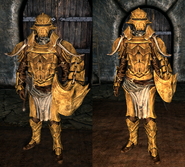 Retrieved from "https://elderscrolls.fandom.com/wiki/Bonemold_Armor_(Dragonborn)?oldid=2940210"
*Disclosure: Some of the links above are affiliate links, meaning, at no additional cost to you, Fandom will earn a commission if you click through and make a purchase. Community content is available under CC-BY-SA unless otherwise noted.