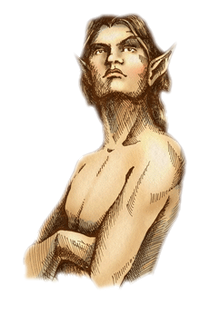 "The clanfolk of the Western Valenwood forests, also known as "Bosmer." Wood Elves are nimble and quick, making them good scouts and thieves, and there are no finer archers in all of Tamriel. Their ability to command simple creatures is well-known."
―In-game description[src]

Across the Empire, the various barbarian Elven clanfolk of the Western Valenwood forests are collectively referred to as "Wood Elves." They also call themselves "Bosmer" - which, roughly translated, means "Tree-Sap/Wood People," denoting their wild vitality and youthful energy. The curious and adventurous nature of the Bosmer contrasts with that of their more dour "cousins," the Altmer and Dunmer.

Wood Elves reject the stiff, formal traditions of Aldmeri high culture, instead preferring a romantic, simple existence in harmony with nature and its creatures. These "country cousins" of the High Elves and Dark Elves are nimble and quick in body and wit, and because of their curious natures and natural agility, they excel in Stealth roles, such as Scouts, Agents, and Thieves. Above all, Wood Elves are known for their skills with Bows; there are no finer archers in all of Tamriel.

Wood Elves are considered ideal for "sneaky" character builds, due to their excellent skill bonuses and attributes. Sneak attacks with poisoned arrows (poisoned via Alchemy) are superb for covertly eliminating enemies, and Acrobatics can sometimes aid them in "sniping" opponents from locations where they cannot be reached. Their skill with Light Armor also helps ensure that any close encounters won't get them killed.

Mysticism and Illusion are particularly useful for "sneaky" characters, but Wood Elves don't gain bonuses to these skills. This lack can be slightly alleviated by choosing either The Lady or The Mage as birthsigns.

Retrieved from "https://elderscrolls.fandom.com/wiki/Bosmer_(Oblivion)?oldid=2997712"
*Disclosure: Some of the links above are affiliate links, meaning, at no additional cost to you, Fandom will earn a commission if you click through and make a purchase. Community content is available under CC-BY-SA unless otherwise noted.