Bosmer (or, more commonly, Wood Elves) are the elven people of Valenwood. They prefer a simple existence, living in harmony with the land and wild animals. They are known to be the best archers in all of Tamriel and are known for their ability to command wild creatures. They make great scouts or thieves, due to their natural stealth and light footing.

After the War of the Blue Divide in the Third Era, in which the Altmer defeated the Bosmer in Valenwood, the Altmer and Bosmer were the core of the newly formed Aldmeri Dominion and its Thalmor forces. The Dominion very nearly destroyed the Empire, if not for the Battle of the Red Ring, which forced the Elven armies to withdraw from Cyrodiil. Following its victory in the Great War, the Third Aldmeri Dominion experienced increased prestige and power that the Mer had not possessed since the First Aldmeri Dominion, which had been defeated by Tiber Septim in the final years of the Second Era. Confident of its ability to defeat the Third Empire, the Dominion further expanded its influence into the other provinces of Tamriel, including the homeland of the Nords: Skyrim. It also reestablished diplomatic relations with the Third Empire, even though they were still engaged in a cold war.

"The clanfolk of the Western Valenwood forests, also known as "Bosmer." Wood elves make good scouts and thieves, and there are no finer archers in all of Tamriel. They have natural resistances to both poisons and diseases. They can Command Animals to fight for them."
―Racial description[src]

Bosmer are often played as stealthy archers, choosing Light armor and favoring the Dark Brotherhood and Thieves Guild quest lines due to their innate skills and abilities. Their natural immunities to both poison and disease make them the most viable candidate for any player not wishing to become a werewolf or vampire but wishing to be protected from these illnesses. This is an advantage over other races which would require enchanted apparel to counter such biological agents, such as Hevnoraak's mask. These resistances, along with their special Command Animal power, make Bosmer an excellent choice for a scout, thief, assassin or treasure hunter type character.

Although the Command Animal power will be obsolete to a high level player, it gives amateurs a way to avoid an otherwise suicidal combat with a powerful creature, such as mammoths or frost trolls without requiring Animal Allegiance. In addition, one may even elect to weaken a mammoth by forcing it to fight its herder using Command Animal, and, once it's near death, cast Soul Trap for an easy grand soul.

Bosmeri characters, through certain ways, can enter the Thalmor Embassy without the need for an invitation, but the guards will be more vigilant towards them and are more likely to attack them than they would to an Altmer. 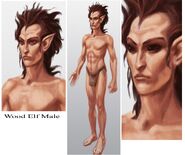 Čeština Deutsch Español Français Polski Português Русский
*Disclosure: Some of the links above are affiliate links, meaning, at no additional cost to you, Fandom will earn a commission if you click through and make a purchase. Community content is available under CC-BY-SA unless otherwise noted.
Advertisement