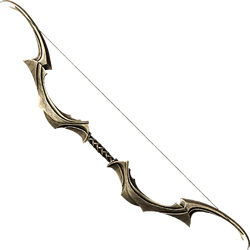 For other uses, see Bow.

Bow is a flexible, bent or curved ranged weapon in The Elder Scrolls V: Skyrim that is strung taut from end to end with a string. Arrows are nocked into the string and then drawn. The arrow is then released and the string pushes the arrow forward.

Bows are found throughout Skyrim and are a common weapon, with many types varying in damage, arrow speed, weight, fire rate, and value. Also they are always a two-handed weapon.

The damage of a bow varies from bow to bow, with the Long Bow being the weakest and Dragonbone (Dawnguard only) being the strongest. Every bow's damage is governed by perks and the level of the Archery skill, but there are multiple other ways to increase a bow's damage.

Almost all bows can be tempered using grindstones found near or around blacksmiths and other locations. Depending on the material of the bow, a bow may be improved with firewood or the appropriate ingot to increase the damage of the bow. Depending on perks and level of the Smithing skill, bows can be made increasingly more powerful.

Bows may also be enchanted with weapon enchantments for a variety of different effects. The strength of the enchantment depends on the size of the soul used, the number of usages per charge and the level of the enchanting skill. The potency of fire, frost, and shock enchantments can be boosted if the Augmented Fire, Frost or Shock perks from the Destruction skill are chosen.

See here for a full list of enchantments that can be applied to bows.

Fortify Marksman potions can be created or bought from merchants to temporarily increase the Archery skill tree.

The weight of the bow also dictates the effort required to pull the string back, or "draw," meaning that the heavier the bow, the longer it will take, and the more damage the shot will do. The lightest bow is 5

, each additional unit of weight added to the bow subtracts another 0.0125 shots/second, so a bow weighing 6

The fire rates between 5

may seem insignificant, but the difference becomes much more noticeable with heavier bows. The Dragonbone Bow, for example, is the heaviest bow weighing in at 20

The overall draw speed can be calculated by the equation:

As weight and quality of the bow's construction material are directly proportional, it is important to note that the better the material (i.e., Glass, or Daedric), the slower the draw speed, and thus the lower the fire rate.

The three fastest bows in the game in terms of draw speed share a common speed of 1.0, the fastest speed: Zephyr, from the Dawnguard quest "Lost to the Ages"; Auriel's Bow, acquired at the end of the Dawnguard quest "Touching the Sky"; and Froki's Bow, a unique long bow found in Graywinter Watch that is obtained at the end of Kyne's Sacred Trials.

The velocity at which a bow shoots an arrow is inversely proportional to the bow's fire rate. In other words, the greater the fire rate of the bow, the lower the velocity.

Usually this means that the heavier the bow, the greater the velocity of the shot. However, there are two exceptions to this rule. In the case of Zephyr, a unique bow weighing 10

and which fires 30% faster than other Dwarven Bows, arrows fired from this bow will travel slower than even a Hunting Bow which weighs 7

. This is due to Zephyr's previously mentioned unique enchantment. Also, the Dragonbone Bow weighs 20, which is one more than the Daedric Bow, however the arrows have a lower velocity than those fired from a Daedric Bow.

The latter type of range, or maximum range, is a universal range between bows. After traveling a certain distance, somewhere around 60–65 yards, all arrows have a damage of 0. Arrows at this distance will most of the time clip through (pass through) enemies and land on the other side having done no damage. This will still cause animals and characters to become aware of the Dragonborn's presence and search for them, however this will not cause friendly characters to become hostile.

If Dawnguard is installed, the player will gain access to crossbows. Crossbows, similar to bows, are ranged weapons that benefit from sneak attacks, and can be enchanted and upgraded. Compared to the crossbow, a bow is much lighter and faster to reload, and arrows are much easier to acquire than their counterpart. However, its base damage is generally lower than the crossbow, and is slower to fire arrows, compared to the crossbow firing bolts.