It is located slightly west of the Yellow Road, slightly north of the Silverfish River, and west of the Imperial Bridge Inn. There is also one boss creature, who guards a chest containing decent loot.

The cave is very unique, as it is the only known cave in Cyrodiil to have the ability to grow Welkynd Stones. The cave also holds Lithnilian's research notes, which are part of the quest "No Stone Unturned."

The Hero met Lithnilian, an Altmer Sorcerer, at the Imperial Bridge Inn in the wilderness southeast of the Imperial City. He has asked the Hero to locate his research notes on Welkynd Stones, which he lost in the depths of Bramblepoint Cave. 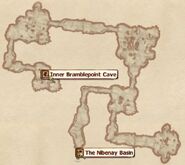 Welkynd Stone Pit
Add a photo to this gallery

Retrieved from "https://elderscrolls.fandom.com/wiki/Bramblepoint_Cave?oldid=2729181"
*Disclosure: Some of the links above are affiliate links, meaning, at no additional cost to you, Fandom will earn a commission if you click through and make a purchase. Community content is available under CC-BY-SA unless otherwise noted.