Brelyna's Practice is a quest available in The Elder Scrolls V: Skyrim. Brelyna Maryon is in need of someone to test her spells upon, and asks for the Dragonborn to help. Completing this quest opens up Brelyna as both a follower and potential spouse.

Brelyna Maryon has asked me to act as a test subject while she practices some new spells. Her first ended badly, but she has assured me that if I let her try one more time, it will work out. I should find her once her spell has worn off.

Speak to Brelyna Maryon after the quest "Under Saarthal" is completed, then agree to let her test out her spells. If she is asked for something in return, one will receive a leveled enchanted necklace. However, the necklace will still be given even if she is not asked for a reward.

After Brelyna casts her first spell, one's vision will take on a greenish hue. Brelyna apologizes, and tells the Dragonborn that the effects should wear off within a few hours.

Wait for two to four hours, then return to Brelyna. She assures the Dragonborn that she will get the spell right and that this will be her last test. Once the spell has been cast, the camera will switch into third person. The Dragonborn will then be transformed into a number of animals found in Skyrim. Afterwards, she will return the Dragonborn to their original state, stating that she will abandon this line of study.

Once Brelyna is spoken to again, she will tell the Dragonborn that she has a long road ahead of her before she'll be able to use the magic she's been studying, but she now knows where to start, thanks to their hard work and assistance. She will then reward the Dragonborn with a leveled enchanted necklace if they have not already received it. Afterwards, she will become available as a follower and spouse for marriage.

When the spell is active, the following effects will take place until it expires:

After the spell expires, these effects will take place during the scene when the Dragonborn gets transformed into the various animals: 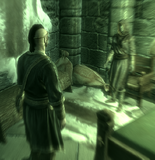 Deutsch Polski Русский
*Disclosure: Some of the links above are affiliate links, meaning, at no additional cost to you, Fandom will earn a commission if you click through and make a purchase. Community content is available under CC-BY-SA unless otherwise noted.
Advertisement