The College of Winterhold

The College of Winterhold

Brelyna becomes a follower and necklace of resist magic

The Dunmer mage apprentice at The College of Winterhold, Brelyna Maryon, is on the verge of discovering some new magic. She asks the Dragonborn's help as a practice dummy. Completing this quest opens up Breylna as both a follower and potential spouse.

Speak to Brelyna Maryon after Under Saarthal is completed, and agree to let her test out her spells. If the Dragonborn asks her what's in it for them they will receive a Necklace of Resist Magic, however this will be rewarded later in the quest anyway.

Brelyna casts her first spell and the Dragonborn's vision gets a greenish hue. Brelyna apologizes, and tells them that the effects should wear off in a few hours.

Wait for 2–4 hours (around 10 minutes, as seen in the "Active Effects" in the Magic menu), then return to Brelyna. She assures the Dragonborn that she will get the spell right this time, and assures them this will be her last test. The camera then switches to third person so there is a better view of the humorous transformations into a number of animals found in Skyrim.

Finally, she succeeds in returning the Dragonborn to their original form, and abandons this line of study.

Speak to Brelyna and agree that this will never be mentioned again. If it wasn't received earlier, she will tell the Dragonborn that they are a good friend, and reward them with a Necklace of Resist Magic. 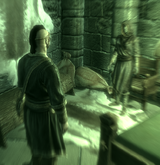 Final dialogue
Add a photo to this gallery
Retrieved from "https://elderscrolls.fandom.com/wiki/Brelyna%27s_Practice?oldid=1455645"
*Disclosure: Some of the links above are affiliate links, meaning, at no additional cost to you, Fandom will earn a commission if you click through and make a purchase. Community content is available under CC-BY-SA unless otherwise noted.