For other uses, see Bretons.

Bretons are a race of both human and elven ancestry.[1] They populate the province of High Rock. They are excellent mages[2] with high magic resistance, but have few other distinctive features. They are considered an intelligent race in Tamriel, known for a proficiency in abstract thinking,[source?] a possible reason for their adeptness in the magical arts. It is suggested that they may also carry Aldmer blood, which would further account for their magical prowess.[1][2]

Unlike the neighboring Redguard and Dunmer populations, the Bretons do not have many of their number in Skyrim. Some, however, do take to city life and are a minority in settlements.[source?]

In the Reach reside a group of Bretons, known as the Reachmen, historically regarded as a barbaric race involved in dark and extreme practices.[3][4] Twenty years before the events of Skyrim, the Reachmen were involved in an armed uprising against the Nords that ruled Markarth.[5] They took the city by force, due to a belief that it belonged to the native population. They were soon driven out by Ulfric Stormcloak, prior to his own conflict with the Empire.[5]

The remaining insurrectionists were later known as the Forsworn.[5][6] The Dragonborn is able to assist the Forsworn during the quest "No One Escapes Cidhna Mine." This results in the normally hostile Forsworn settlement of Druadach Redoubt to become friendly.

Beyond this, Bretons often take the role of court wizard to a Jarl, or study as scholars at the College of Winterhold. Occasionally, one may also see a Breton merchant, such as Belethor.

"In addition to their quick and perceptive grasp of spellcraft, even the humblest of High Rock's Bretons can boast a resistance to magic. Bretons can call upon the Dragonskin power to absorb spells."
―Racial description[src] 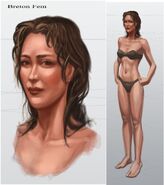 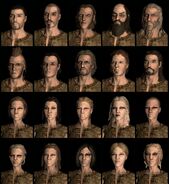 Čeština Deutsch Español Bahasa Indonesia Polski Русский
*Disclosure: Some of the links above are affiliate links, meaning, at no additional cost to you, Fandom will earn a commission if you click through and make a purchase. Community content is available under CC-BY-SA unless otherwise noted.
Advertisement