Brittlerock Cave is a small, two-level, two-entrance cave on the northern side of the Gold Coast region, northwest of Kvatch, with an old, defunct daedric shrine. It is occupied with various level-dependent Daedra.

It is one of the few locations outside of Oblivion that is occupied by Dremora. Other than a few chests, there is no notable loot.

A scholar, Elante of Alinor, wishes to study a Daedric Shrine that she believes is inside Brittlerock Cave. The Hero is to head there and escort her through the cave. 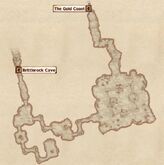 Brittlerock Lower Passages
Add a photo to this gallery

Retrieved from "https://elderscrolls.fandom.com/wiki/Brittlerock_Cave?oldid=2685171"
*Disclosure: Some of the links above are affiliate links, meaning, at no additional cost to you, Fandom will earn a commission if you click through and make a purchase. Community content is available under CC-BY-SA unless otherwise noted.