For other uses, see Bruma.

Bruma is the northernmost city in the province of Cyrodiil, located in the Jerall Mountains along the border to Skyrim, and is the county seat for County Bruma. Bruma's northern latitude, combined with its high altitude, results in a much different climate than that of the other populated areas of the province. The city is perpetually covered in snow, with clear, sunny days a rarity. The city has adapted to the climate by using the Nordic way of life.

Due to Bruma's proximity to Skyrim it is populated primarily by Nords, both immigrants from Skyrim itself, and Cyrodiilic citizens longing for a place more like their ancient home. The non-Nordic people of Bruma tend to adapt to the culture of their northern neighbors, though most of the Cyrodiilic Nords strive to be more Imperial. The city's culture is similar to that of Solstheim, an island near Morrowind that is part of Skyrim, but heavily populated by Imperials. Given the Nordic penchant for battle, and their legends linking Tiber Septim to the ancient Greybeards, it is not surprising that Bruma's patron saint is Talos, the divine aspect of Tiber Septim.

The city is built directly into the side of the Jerall Mountain peaks, with the main gate at the eastern end, and Castle Bruma at the westernmost point. The northern half of the city is built onto four man-made steps leading up to the castle walls, which is where the guild halls and shops are located. The southern portion consists of a single road, containing the bulk of the residences, which follows a naturally sloping semicircle from west to east. The city's most prominent feature, the Great Chapel of Talos, lies at the heart of this semicircle, and is the first sight a visitor will see upon entering Bruma's main gate.

For most details about this City, see Bruma's volume in Alessia Ottus's guidebook series, Guide to Bruma.

Ongar, the first fence for the Thieves Guild, lives in this city.

J'Ghasta's House has a Black Hand Hood and a Black Hand Robe worn exclusively by members of the Dark Brotherhood, which raises your Sneak, Marksman, Illusion, Blade and Speechcraft by 4 and 11 points respectively. The equipment is protected by a Very Hard lock on a keg in the lower level. There is also a "Secret Training Room" hidden door in the corner of the lower level under some fabric swaths. There are some practice dummies here and light reading is available (increase hand-to-hand).

Statue of the Hero[]

After completing the "Great Gate" quest, a statue of the player character will be erected near the north gate to the Jerall Mountains. The statue features the equipment that the game considers the best of what the Hero had in their inventory during the quest.

Bruma is understood to be a Nibenese county, but in truth it is more Nord than Nibenese, on account of its close proximity to the Skyrim border, and on account of the terrible cold and discomfort of its location high in the Jerall Mountains. Bruma is always cold and covered with snow, with braziers kept burning in every quarter to prevent the citizens from freezing to death. Everything is built from wood since trees are so plentiful in the forests of the Jeralls, and even rich men live here in dark wooden cabins.

Unlike most other cities, there is very little diversity among the architecture of Bruma. There is no prominent aristocratic or commercial region to speak of. Almost all of the buildings, from the guild halls down to the single-person residences, are sturdy wooden buildings built on top of a thick granite base. Most houses are built with the top story at ground level, as to maintain heat in the living areas. The only notable difference between the high-end houses and the lower-end ones are the presence of a second story, and in some cases, a basement. Though the buildings are constructed similar to the log cabins of the Skyrim frontier, they are extremely well-built, and generally sport elaborate doors and external support beams, decorated all over with Nordic carvings. There is very little decorative architecture about Bruma apart from the buildings themselves; in particular, the climate is far too harsh to support parks, trees, ponds, or other natural features found in other cities. Bruma (influenced by Nords) and Cheydinhal (influenced by Dark Elves) are the two cities most affected by foreigners in Cyrodiil.

Countess Narina Carvain is a Nibenean Heartlander, though she can be just as cold and brusque as her city. A dutiful chapel-goer and a respected ruler; she is a cunning, ruthless negotiator and has a reputation for sharp dealing and treachery, as well as a noted scholar and collector of Akaviri artefacts. She runs the county efficiently and the region is well-ordered. The Countess makes sure that Bruma has a well trained and aggressive town watch. To lead the town watch she has hired a Nord named Burd as Captain of the Guard.[1]

Castle Bruma is cold and drafty, carelessly decorated, and dark with soot from the perpetually burning braziers. The smell of smoke and cinders is overpowering. The high ceilings are grand, but impossible to heat. The ancient layers of soot and filth encrusting the stonework makes it difficult to appreciate the exceptional stonecarving. Except in its stonework and grand scale, the castle is like the log cabins of the people: cold, dark, drafty and dirty.

Access to the castle is through a gate west from the town into a courtyard. The shops, inns, and guilds are located in the north, either on the western terrace near the castle gate, or below the terrace, north of the chapel. The chapel is the central feature of southern Bruma, with houses ranged along the inside of the walls to the east and south.

Bruma has the standard Fighters Guild hall and Mages Guild hall, both located on the second tier, where guild members can find rest and training. However, these are very small guild halls, with only a handful of members in each guild and only apprentice-level trainers. However the Bruma Mages Guild is a good starting point for mage-type characters since the guild members sell spells in every school, with a wide variety of effects. Of particular note is the Summon Dremora Lord which cannot be purchased anywhere else.

Bruma is home to two taverns, both of which offer food, drink and lodging:

Bruma's commercial options are somewhat limited, though one can take advantage of the Nords' world-renowned skill at forging weapons and armor. The following shops are available:

Bruma is home to a Thieves Guild Fence, Ongar the World-Weary, who can be found in Olav's Tap and Tack when not in his own house.

Other points of interest[]

Bruma is, in general, a very utilitarian city. There is not much in the way of sightseeing or tourism, so there is very little of interest to those without specific business in the city.

The city boasts an impressive chapel, the Great Chapel of Talos, as its central feature.

The most interesting features of Bruma actually appear outside the city, to the north. The Emperor's private guard force, the Blades, have occupied a large Akaviri fortress north of Bruma, called Cloud Ruler Temple. In addition, somewhere in the Jerall Mountains is the infamous Pale Pass, where Emperor Reman I finally defeated the Akaviri invaders towards the end of the First Era.

For a full list of all the residents of Bruma, see Bruma Residents.

Bruma has few residents of any real note, apart from the merchants themselves:

There is a single, unoccupied house for sale on the eastern side of town.

The following are the only quests that specifically start in the city: 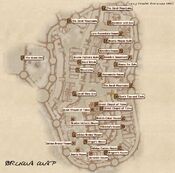 The Great Chapel of Talos

The south gate at dusk