Blood of the Daedra

Allies for Bruma
Blood of the Divines

Bruma Gate is a quest in The Elder Scrolls IV: Oblivion. After delivering a Daedric artifact to Martin he informs the Hero that Jauffre needs to speak to them while he continues to analyzing the Mysterium Xarxes.

Find Jauffre, he can be inside the Cloud Ruler Temple or outside with the other Blades. He tells the Hero the Bruma Guard needs help to close the Oblivion Gate located just outside the city, as they have had experience with closing them before. They must show the Guards how to shut it down so they will know how to do it if any more Gates will open after closing this one.

Travel to Bruma and find Captain Burd outside the east gate. He has gathered his men and they are looking at the Oblivion Gate. The Captain will first tell the Hero to wait as he wants to have a minute with his men. He informs them on what to do, it will be only him, the Hero and a few of the Guards going inside the Gate and the rest should stay and kill anything that comes out from it.

He asks the Hero if they are ready and then he charges into the Gate. There are a few Daedra coming out of the Gate. Either help the Guards to kill them or go through the Gate after the Captain.

Once inside try and help the Guards stay alive as long as possible, replenish their health by waiting an hour when the area is clear as they can give the Daedra extra damage if needed. Captain Burd is an essential character so he can be knocked unconscious but heal himself when he comes to.

After disposing of the Daedra in the first attack, follow the path around clockwise. Go as far north as one can and then begin heading south and west towards the center of the island and the citadel. There will be more Daedra coming along on the way and beware of the spinning defense turrets shooting fireballs when nearby.

When inside the corridors take either path and follow it up, perform a u-turn and then up again to the upper level which has another exit to the Fury Spike where the lava is flowing upward. Walk up the side ramps to the locked door to the Sigillum Sanguis. If the Sigil Keeper is near he will attack and after he is killed take the Sigil Key from him to open the door.

Once inside the circular chamber, defeat the Daedra with the help of the Captain and proceed up the stairs on either side. More Daedra will attack then continue up either ramp to the top where the Sigil Stone is. Wait for the Captain to arrive so he can see them take the Sigil Stone, which will transport them back outside Bruma.

Upon returning outside Bruma, Captain Burd will thank the Hero for the help and after asking him if he needs more help he says he will now be able to close any other Gates that will open. He addresses his men and then they walk off.

Head back to Jauffre and Martin and let them know about the success of closing the Gate. 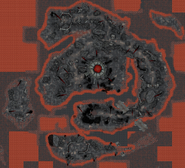 Local map of the Bruma Gate world. Starting location is the south east edge of the main island.
Add a photo to this gallery
Retrieved from "https://elderscrolls.fandom.com/wiki/Bruma_Gate?oldid=2965621"
Community content is available under CC-BY-SA unless otherwise noted.