Innocent Scoundrel
Like Moths to a Candle
then The Spearhead's Crew

Buried Secrets is a quest available in The Elder Scrolls Online. A researcher named Neramo asks the Vestige for help exploring the Dwemer Ruins of Bthzark.

After finding Neramo outside the Bthzark ruin, he explains he and his brother Bhosek have secured the exterior of the ruin but he needs to get inside as there are fascinating ancient mechanics to be found. Two focusing Crystals are missing to repair the automaton he has, who he believes can open the entrance and he asks the Soulless One to assist in finding them.

Follow the markers to find the crystals, fight the creatures attacking and then return to the entrance to speak with Neramo. He is delighted and starts to repair the automaton and the rod that controls it. Then he performs a demonstration for the Soulless One to watch and observe. He sends it off to open the door.

Enter the ruin with Neramo, and he asks for another favor. He suspects the usual defenses are in place and as he is averse to danger could they help him repair the Dwemer generators inside. After accepting the task he gives the control rod to them and explains how it works. The automatom needs to be escorted to the each generator so it can repair them.

Escort the automaton to the generators, and meet up with Neramo after it's done in the central chamber of the ruin. He is once again delighted and that Bthzark breathes again. Then he asks for a more personal project that will give more coin in reward. He explains he accepted the request from Bhosek to explore the ruins as he knew there where something inside he believes others have died trying to obtain.

Knowledge is the greates tresure, The Dwemer guarded their secrets very well and hid a set of schematisc, mechanical drawings that he greatly desire to possess. If they find anyone of those earlier explorers they might have the schematics nearby.

Enter the assembly chamber with Neramo and fight the Dwarven Spiders on the way, passing some skeletons and finally the last skeleton deep inside. Beside him is the Dwemer Schematics. Pick it up and head outside to find Neramo.

He pretends he was just on his way to find them and asks if the Vestige found the schematics. Give them to him and he is ecstatic and says that this places him in their debt. He asks if there is something he can do in return, and he is intrigued as he heard Kaleen was on her way to Betnikh, then he can do some research on the ruins there but he promise to help with the heist first. He rewards the Vestige with Neramo's Staff and some

The automaton repairs a generator 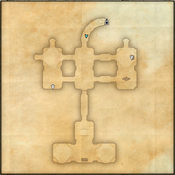 Local map
Add a photo to this gallery
Retrieved from "https://elderscrolls.fandom.com/wiki/Buried_Secrets?oldid=2951466"
Community content is available under CC-BY-SA unless otherwise noted.