The Cadlew Chapel is an abandoned chapel situated on the bank of Silverfish River east of Bravil.

The chapel has been taken over by a group of necromancers. The chapel's interior is a mess, with benches thrown around and several dead zombies on the floor. The Hero will find two necromancers inside, along with a dead treasure hunter and a chest with some random loot. There are two of the rare Human Hearts on the floor. The altar has been defiled and consequently will not give the hero a blessing. A ladder gives access to the top of the tower, where there is a skeleton and a chest containing random loot. 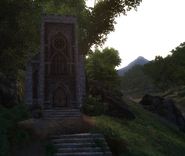 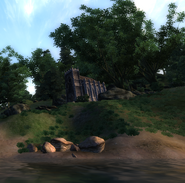 Retrieved from "https://elderscrolls.fandom.com/wiki/Cadlew_Chapel?oldid=2726427"
*Disclosure: Some of the links above are affiliate links, meaning, at no additional cost to you, Fandom will earn a commission if you click through and make a purchase. Community content is available under CC-BY-SA unless otherwise noted.