"It's the same old pish-posh. Gallant knight, epic quests rescued maidens. I came to this land when my head was quite unceremoniously separated from my body. Bad luck that, but you make the best of things."
―Cadwell[src]

Sir Cadwell is the oldest of the soul shriven, and is a cheerful and endearingly mad lost soul. In life, he was an insane Imperial from Chorrol, and Lyris Titanborn remarks that the reason he has remained functioning for so long is because he was already mad when he got to Coldharbour. It is said that he is not afraid of anyone, not even a Daedric Prince, and resides in Coldharbour. He died by decapitation.

Initially met in The Wailing Prison, he later appears in The Harborage, and later on in many locations around Coldharbour. He has a hovel setup in a Nordic ruin in the southern part of the zone.

Cadwell was formerly known as Cadwell the Betrayer, a champion and knight of a time long past. He was known to help people but his motives weren't entirely altruistic.

Cadwell was friends with a Khajiit hero named Khunzar-ri, with whom he managed to stop the Dragons. This accomplishment was achieved by tricking Kaalgrontiid into placing a portion of his power in Plane of Jode. Blinded by his ambition, Kaalgrontiid ordered his brothers to do the same. Once the dragons were weakened, Cadwell and Khunzar-ri trapped them inside the Halls of Colossus.

Soon afterwards, Cadwell killed Khunzar-ri by stabbing him in the back, an act which earned him the nickname, "the Betrayer." Cadwell hoped to steal the power of the dragons within the Core and slaughtered his way through Shadow Dance Temple to reach it, but Anequina's adepts managed to stop him by cutting off his head and dismembering his body before he could achieve his goal.

Cadwell's body parts were buried in separate locations throughout Elsweyr, with his head being buried in a grave marked with his title. Cadwell lost all memory of his past self, becoming genuinely altruistic to the point of deeply hating his old self.[1]

After the gate to the Prophet is warded off, the Vestige and Lyris consult him in order to find a new route, with the latter stating that because he's the oldest of the Soul Shriven, he must know Coldharbour well. He tells them of an alternate path to the Prophet's cell—the Undercroft—which is accessed by following the river. After warning of traps and enemies, he also admits doubt to the plan's success, but wishes the party good luck anyway.

Castle of the Worm[edit | edit source]

When the Vestige and Lyris arrive at the Castle of the Worm to rescue Abnur Tharn, they ask the soul shriven in the nearby town how to get inside the castle undetected. The locals direct them to Cadwell, whom they rescue from Worm Cultists. Grateful for their assistance, Cadwell assists them in infiltrating the castle and again during their escape by opening a locked gate from the outside. The Vestige then has the choice between bringing Cadwell back to Tamriel or leaving him in Coldharbour.

The Army of Meridia[edit | edit source]

Upon arriving in Coldharbour with the Fighters and Mages Guild force, the Vestige is separated by Molag Bal's defenses, and lands alone to the south of the Hollow City, near Cadwell's hovel. The old knight directs them north to the city. Afterwards, he assists survivors from Tamriel in returning to the Hollow City by using portals to traverse to Coldharbour.

Once the Vestige rescues Vanus Galerion from the Black Forge, Cadwell helps defend Vanus from Daedra alongside the Vestige, Treva, and Svari while Vanus destroys the Great Shackle.

Cadwell directs the Vestige to destroy Molag Bal's reinforcement portals while the Tamrielic force of Mages and Fighters Guild members fight their way across the Chasm. He also fights Molag Grunda alongside the Vestige after they reached the gatehouse at the end of the Chasm.

Once the Planar Vortex was reached, the Groundskeeper revealed herself to be Meridia. She guided the Vestige and their group, including Cadwell, as they destroyed Dark Anchors. Once the Light of Meridia's power was released at the focal point of the Vortex, Meridia transported the survivors back to the Hollow City before they were killed.

After the Five Companions had performed the ritual to imbue the Vestige with the power of Akatosh, the surviving Companions were attacked by Daedra. Before they could be overwhelmed, Cadwell arrived and brought them through a portal to the Harborage. Once the Vestige had defeated Molag Bal and recovered their soul, Cadwell declared he was now pledged to serve Meridia. He told the Vestige how to use the Light of Meridia to journey to the lands of their enemy alliances should they be interested in exploring them.

A Rage of Dragons[edit | edit source]

The Battle for Riverhold[edit | edit source]

The Heir of Anequina[edit | edit source] 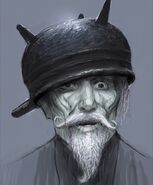 Cadwell when he is first met in Coldharbour

Retrieved from "https://elderscrolls.fandom.com/wiki/Cadwell?oldid=3155670"
*Disclosure: Some of the links above are affiliate links, meaning, at no additional cost to you, Fandom will earn a commission if you click through and make a purchase. Community content is available under CC-BY-SA unless otherwise noted.