For other uses, see Caius.

"No point in being part of history if you're too ignorant to understand it."
―Caius Cosades[src]

During the events of 3E 427, Caius Cosades was the head of the Blades in Vvardenfell, being situated in the city-state of Balmora. Cosades received information from Uriel Septim VII himself about a prisoner that piqued the Emperor's interest, he wants this prisoner to fulfill the Nerevarine Prophecy for his own deeds.[1] After the prisoner was brought to Seyda Neen, they were redirected to Balmora, where they would meet with Caius Cosades at his home.[2] At that point, Cosades had named the prisoner, a novice of the Blades.[3]

From that point on, Cosades had used the prisoner as an agent, sending them on quests and have them meet with correspondents such as Hasphat Antabolis of the Fighters Guild,[4] a handful of informants in Vivec,[5] and Sul-Matuul of the Urshilaku Tribe,[6] and a handful of others.[7][8] As time went on, the plan was going smoothly and it seemed that this Agent was the Nerevarine of legend. After he had sent the Agent to the cavern of Ilunibi and the Agent slew Dagoth Gares, the Agent had contracted Corprus.[9] He would then send them to Divayth Fyr, who would cure them.[10] When the Agent returned, he was promoted to Operative but told this was their last order from Cosades, who was recalled to the Imperial City. Caius presumed it had to do with the Emperor's health and his succession, and so assumed he would be gone for a while. Caius left his house, his ring, his Blades pants, and his Blades shirt for the Agent until his return. Caius Cosades traveled back to Cyrodiil, informing the Agent that he feared for the future of the Empire.[11] As the Operative continued their journey, fulfilling the Nerevarine Prophecy.[12]

After the Oblivion Crisis in 3E 433, Caius Cosades was stationed in the city-state of Kragenmoor, which was under the occupation of House Hlaalu. Fortunately for him, the Crisis did not entirely affect Kragenmoor and the local shrine of Akatosh had pilgrims coming in the ten-folds. He would eventually move back to Cyrodiil and the city-state of Kvatch to see his sister and the local festival. Once he had returned, he visited the tomb of Uriel Septim VII, paying his respects to his old friend. Praising how Martin Septim turned out, as opposed to his other sons with Caula Voria. Caius would eventually leave and continue his duties as a Spymaster of the Blades.[UL 1][UL 2]

Once Caius Cosades had left for Cyrodiil in 3E 427, his operative continued with the plans and established themselves as the Nerevarine. From then on, the Nerevarine would fulfill the prophecy, slaying both Dagoth Ur and Almalexia.[12][13] His efforts with the Nerevarine in Vvardenfell caused a long-term effect on Morrowind, which inadvertently was the Red Year, the Accession War, and the revoked Great House status of House Hlaalu.[source?] What became of Caius Cosades is unknown, but he likely passed away of old age, considering his appearance. His age in 3E 427 is unknown but by then, he was a senior member of the Blades. The faction itself would eventually become fragmented and resurface in Skyrim. 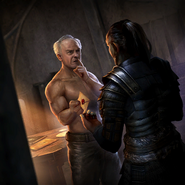 Card art for Caius' Machinations.
Add a photo to this gallery

Notice: The following are unlicensed references. They are not copyrighted by a ZeniMax Media company, but can still be considered part of The Elder Scrolls lore and are included for completeness.
Retrieved from "https://elderscrolls.fandom.com/wiki/Caius_Cosades?oldid=3079880"
*Disclosure: Some of the links above are affiliate links, meaning, at no additional cost to you, Fandom will earn a commission if you click through and make a purchase. Community content is available under CC-BY-SA unless otherwise noted.