Deliver Adonato's Book to Giraud
Blood on the Ice

"If it's bed or board you're after, Candlehearth Hall's got both."
―Windhelm Guard

Candlehearth Hall is the inn of Windhelm. To the citizens of Windhelm, it is a place of warmth, comfort, and security, where all the troubles of the outside world are drowned away by cold mead. It is the first building seen upon entering Windhelm.

The building was originally home to a great warrior named Vundheim from the early Fourth Era. When he died in 4E 38 his son, Deroct, lit a candle above the hearth in his honor. Since that day, the candle has never gone out and as such the inn owes its name to this phenomenon.[1]

Blood on the Ice[]

A serial killer known as the Butcher killed Friga Shatter-Shield, daughter of the Tova Shatter-Shield and Torbjorn Shatter-Shield. After Susanna the Wicked, a barmaid of the inn, is murdered after leaving work for the night, the Dragonborn is recruited by the Windhelm Guard and the Jarl's steward to give the victims justice. During their search, the Dragonborn learns that the Butcher followed Susanna as she left the inn, murdering her in a nearby cemetery. The clue inevitably lead the Dragonborn to Tova, the mother of the previous victim. From Tova, the key to Hjerim can be obtained, Hjerim being Friga's home before her death.

If, for some reason, the Dragonborn is able to start the quest before Susanna is killed (as part of a bug or glitch), she will remain at Candlehearth Hall going through her daily routine.

If Nilsine Shatter-Shield is killed for Muiri, Tova commits suicide. Her corpse can be found on the floor in the upper levels of the hearth, accompanied by a letter, explaining that the death of her twin daughters led to her take her own life.

On one of the cupboards, there is an adept-level strongbox. 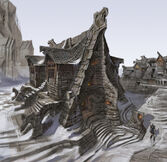 The Corridor on the lower floor

The rentable room in the inn

The room on the left corner

The room on the first right side