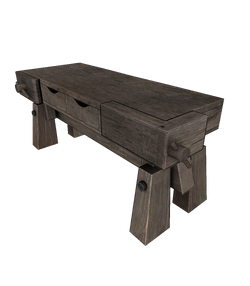 A Carpenter's Workbench is a crafting station in The Elder Scrolls V: Hearthfire.

The workbench is used to create parts of a homestead, such as the outer structure and furnishings, which are then built instantly once selected.

It's advisable to craft the anvil at the small back room of the Main Hall first, so that it can be used to craft other items such as nails or iron fittings. This removes the need go outside repeatedly to use the outdoor anvil.