The Cathay-raht are a breed of Khajiit, a race hailing from the land of Elsweyr.

The Cathay-raht are large bipedal Khajiit, much larger than the standard Ohmes, Ohmes-raht, Suthay-raht, and Cathay seen wandering Tamriel.

Their body structure is much larger than the normal Cathay. They are described as being "Jaguar-Men" with pointed ears, wide yellow eyes, mottled pied fur, and having a whip like tail.[1] The Cathay-raht are known to be very fast, agile and strong, and able to jump incredible heights and distances with great dexterity.[2] One account describes them as being of the same size and speed as a werewolf.[1]

During the Five Year War, the Cathay-raht were deployed as powerful front-line infantry against the forces of Valenwood.[3]

The Cathay-raht are one of the seventeen confirmed breeds of Khajiit, and each breed is born due to the influences of Nirn's two moons, Masser and Secunda.

The former is Nirn's largest moon, and the main influencing force on Khajiit breeds. Depending on Masser's lunar lattice, the Khajiit will fall under one major appearance and physiology out of four possibilities. These are as follows: 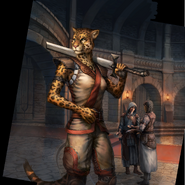 Cathay-Raht in Legends.
Add a photo to this gallery

Retrieved from "https://elderscrolls.fandom.com/wiki/Cathay-raht?oldid=3031258"
*Disclosure: Some of the links above are affiliate links, meaning, at no additional cost to you, Fandom will earn a commission if you click through and make a purchase. Community content is available under CC-BY-SA unless otherwise noted.