"The Colovian people are known for their devotion to the Imperial Eight Divines, so it's not surprising that the church of the Primate of Akatosh is located in Kvatch, on the western edge of the Colovian highlands."
―Cathedral of Akatosh Loading Screen[src]

The cathedral catacombs are a large series of underground tunnels and rooms located beneath the cathedral. The entrance is found within the crypt.

A crypt is located on the left/north side of the Cathedral, containing multiple graves. An entrance to the catacombs is found towards the back.

A Ghost from the PastEdit

Burning the last of the resin used brought by Green-Venom-Tongue, a vision of Lyra Viria going to the Cathedral on her task to kill Primate Jonas is seen. However, she is stopped by Artorius Ponticus, who reveals that he sent for her in order to bring her talents to Akatosh. Lyra agrees, and Artorius redeems her as The Black Dragon.

Tanek will be found at the crypt, showing you the back entrance of the Cathedral. Inside, Kor and Hildegard will be fighting off Wamasu, while you must kill their commander, the Wamasu Matriarch. After that, Elam Drals and Astara Caerellius will locate a gate, only to find it locked. Taking the alternate route, Graza will be in a chamber fighting off Order of the Hour members. Once you help her defeat them, you must kill their commander Captain Furia. After this, you must continue on and go up the stairs, leading to the basement exit to the Cathedral itself. Once inside, Primate Artorius will be waiting to attack you. With the help of the Brotherhood members, you must defeat Artorius' minions, and then finally the Primate himself. Artorius will be kneeling at the podium, with the Brotherhood granting you the honor of impaling him with his own staff.

Spread the word of Boethiah to Initiate Ranius, in order to get Grand Chanter Surus' attention.

Close view of the interior

Far view of the interior

The steeple at the top

The front of the Cathedral

Entrance to the Catacombs 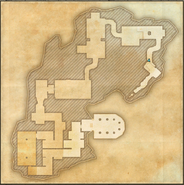 Retrieved from "https://elderscrolls.fandom.com/wiki/Cathedral_of_Akatosh?oldid=3079223"
*Disclosure: Some of the links above are affiliate links, meaning, at no additional cost to you, Fandom will earn a commission if you click through and make a purchase. Community content is available under CC-BY-SA unless otherwise noted.