"Centaurs are ancient and mysterious creatures, alternatively worshipped and despised. Legends of their exploits range from the epic to the pornographic, perhaps for no better reason than that they have varied personalities. The Council of Artaeum have called the Centaurs "true followers of the Old Ways" of Tamriel, referring to the complex system of ancestor worship that Artaeum itself espouses. All that one can certainly say about Centaurs is that in battle, there are few who are equal."
―Manual description[src]

Centaurs are humanoid creatures that can be found in the provinces of Valenwood and High Rock. Centaurs are creatures with the bottom half of a horse and the top half of a humanoid figure. These elusive creatures are considered the true followers of the "Old Ways," related to their traditional spiritual practices.[1]

Centaurs are known to live anywhere from the frozen wastes of High Rock to the warm jungles of Valenwood. They are intelligent enough to utilize weapons and tools, such as spears and bows, even being able to fashion clothing or armor.[2] Centaurs are known to be challenging adversaries in battle.[3] The Elden Hollow underneath the Capital of Valenwood, Elden Root, is the final resting place for generations of Centaurs and Minotaurs.[source?]

In 3E 405, some members of the Resolution of Z'en were known to offer lessons in Centaurian language, though it is unclear if this knowledge was lost during the Warp in the West.[4] 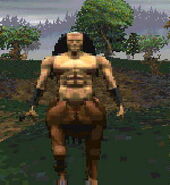 The Elder Centaur in Legends.
Add a photo to this gallery

Retrieved from "https://elderscrolls.fandom.com/wiki/Centaur?oldid=2942496"
Community content is available under CC-BY-SA unless otherwise noted.