The Chantry of Auri-El is an isolated, but vast series of temples located across the Forgotten Vale. It once served as the epicenter of the Snow Elf religion, the chief deity of which was the Aldmeri god Auri-El.

It was constructed in the Merethic Era to provide a retreat for those who wished to become enlightened. Pilgrims undertaking this journey were called Initiates.[1]

Additional temples existed throughout the empire to worship other deities such as Trinimac, Syrabane, Jephre, and Phynaster, but none were as grand as the Chantry of Auri-El.

The wayshrines located throughout the chantry played an important part of the process. They represented the steps Initiates took on the path to total enlightenment. The magic used to construct them is believed to predate the First Era.

Snow Elf priests, known as Prelates, tended to these wayshrines. They were responsible for teaching Initiates the mantras of Auri-El. The symbolic rite stated that the initiate would fill a ewer with water from the central basin of a wayshrine after performing a mantra. Once the initiate's enlightenment was complete, they would bring the ewer to the Chantry's Inner Sanctum. Pouring the contents of the ewer into the sacred basin thus allowing him access to the temple and would grant the Initiate an audience with the Arch-Curate himself, This in theory was to complete the initiates journey.

After the war with the Atmorans in the Merethic Era, the Snow Elves were forced underground and eventually de-evolved into the Falmer, also to be known as the Betrayed. As the Chantry was isolated from both the Atmorans and Snow Elf alike, it was relatively unaffected by the war or the de-evolution of the Snow Elf race. Over time however, the Falmer discovered the well concealed Chantry and slaughtered the remaining survivors.

Knight-Paladin Gelebor was one of the only survivors left, but despite the genocide, he remained inside the Chantry at his post guarding the first wayshrine. The Prelates were magically restored to a spectral state by Auri-El to enable them to continue their duties.

The remnants of the Chantry can be found in Darkfall Cave during this quest, and Knight-Paladin Gelebor can be found tending to the wayshrine. After speaking to him, he will give the Dragonborn an Initiate's Ewer and use Snow-Elf magic to open the first wayshrine, leading to Darkfall Passage.

The remains of the Chantry of Auri-El.

A close-up view on the chantry. 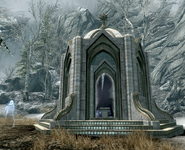 The Wayshrine of Sight. 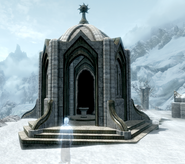 The Wayshrine of Resolution. 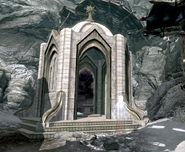 The Wayshrine of Radiance. 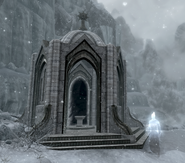 The Wayshrine of Learning. 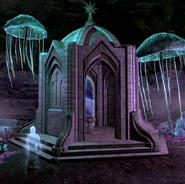 The Wayshrine of Illumination.
Add a photo to this gallery

Start a Discussion Discussions about Chantry of Auri-El

See more discussions >
Retrieved from "https://elderscrolls.fandom.com/wiki/Chantry_of_Auri-El?oldid=2849385"
*Disclosure: Some of the links above are affiliate links, meaning, at no additional cost to you, Fandom will earn a commission if you click through and make a purchase. Community content is available under CC-BY-SA unless otherwise noted.