Castle of the Worm

Main quest line
Chasing Shadows is a quest available in The Elder Scrolls Online. The Prophet has called the Vestige to the Harborage in order to seek a way to rescue Sai Sahan, a Redguard and member of the Five Companions. The quest is the same for all alliances. However, the closest city will change based on the chosen faction.

The Prophet and I are seeking a way to rescue Sai Sahan, the Redguard who hid away the Amulet of Kings.

The Prophet will direct the Vestige to the nearest major city to find and kill Aldimion, an agent of the Worm Cult. He will also ask for the Vestige to question the city's locals for information about the agent.

Mehdir in Vulkhel Guard saw an Imperial man by the lighthouse. Talking to Diranor reveals that man was looking for the local burial grounds. Inside the lighthouse, the Vestige will find a suspicious cellar.

Maxelle, who can be found near the Millworks, claims to know everyone in town, and noticed an Imperial "vagrant nosing around." Husniya, located in The Rosy Lion, will reveal that Imperial is probably staying on the south side of town. Inside Vachel's House, the Vestige will find a suspicious abandoned cellar.

Okeeh, who can be found south of the Fighters Guild, has noticed an out-of-towner in the abandoned stables. Feduria Llaren, who is usually in the market district, recalls an Imperial who pushed her while she was haggling at the market. He then went to the east end of town. Further investigation will lead the Vestige to a mysterious cellar in the abandoned stable behind the blacksmith building, Avani Bladeworks.

Inside the cellar are multiple skeletal warriors. Further within is Aldimion, who will turn hostile and attack the Vestige. Afterward, use the Orb of Discourse to speak with Abnur Tharn. Because Abnur will not recognize the Vestige, one can choose to persuade him or simply ask who he is. If asked about Sai Sahan, he will respond that he knows his location, but will refuse to reveal it.

If the persuasion attempt on Abnur fails, Severinus Falco will arrive and attack the Vestige. Afterward, the Orb must be taken to the Prophet, who will use it to find Sai Sahan. Once this is done, Lyris will talk to the Vestige, saying that Abnur Tharn can be persuaded to leave the Worm Cult. She will then reward the Vestige, and the quest will be completed. 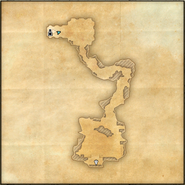 The Worm's Retreat interior map
Add a photo to this gallery

Retrieved from "https://elderscrolls.fandom.com/wiki/Chasing_Shadows?oldid=3111784"
*Disclosure: Some of the links above are affiliate links, meaning, at no additional cost to you, Fandom will earn a commission if you click through and make a purchase. Community content is available under CC-BY-SA unless otherwise noted.