For other uses, see Chaurus.

"Those venturing in Skyrim's deepest underground reaches should be wary of the Chaurus, a giant insect that spits poison and bites with its razor-sharp mandibles."
―Loading Screens[src]

The Chaurus is a hostile insect found in The Elder Scrolls V: Skyrim.

Chaurus are large, venomous insects that live deep in the lightless caverns and chasms beneath Skyrim. They have been domesticated by the Falmer, and often live and fight alongside their masters. One should be sure to improve one's resistance to poison with abilities, potions, or enchantments when facing them. They drop small valuables such as

There are four main varieties of chaurus: standard, Chaurus Reaper, Chaurus Hunter Fledgling, and Chaurus Hunter. The latter two are implemented by the add-on Dawnguard. Deep underground, in certain areas, Chaurus Reapers grow to be unusually large. These larger chaurus reapers are fast in movement but not very agile, yet still may be difficult to kill. The Chaurus makes a unique clacking sound to communicate, so if this noise is heard, there is a chaurus ready to strike.

While the hunter variant's existence in Skyrim is dependent on having Dawnguard installed, it is not limited to spawning in areas exclusive to the add-on. Any area that has any chaurus spawn may have hunters spawn instead so long as the Dragonborn is of sufficient level.

Chaurus are similar to flies and caterpillars in that they have several stages of growth: from an egg, a chaurus will hatch and begin growing. Then, after an unknown amount of time, the chaurus will begin to die; they will then cover themselves with a thick resin to create a chrysalis. From there, the chaurus transforms into a hunter fledgling. In other cases, the chaurus will keep growing and become a chaurus reaper, and will then start to lay eggs in a nest. 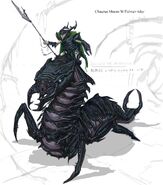 Concept art of a chaurus as a Falmer's mount 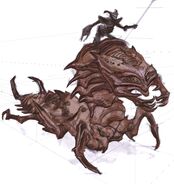 A cavern inhabited by Chaurus. 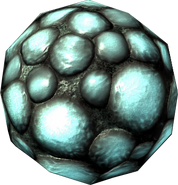